On Bryan Crimmins' 100th birthday, Andrew Gigacz looks back at the 1944 mini 'trade war' in which Melbourne and South Melbourne fought for the services of Crimmins and Len O'Shea. 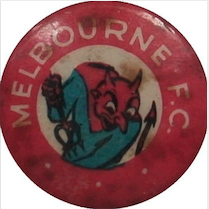 Rarely have two players who between them ended up playing only three VFL games created such interest. But such was the case in 1944 when South Melbourne and Melbourne fought for the services of Len O'Shea and Bryan Crimmins.

Before the 1944 season got underway in earnest, Melbourne verbally agreed to clear 24-year-old centreman Len O'Shea, who had played in their Seconds in 1943, in exchange for for an unnamed "Public School football star residentially bound to South".¹ But following a series of pre-season practice matches in which O'Shea had impressed for the Swans (in particular a "sparkling" effort on star player Herb Matthews in an intra-club match), Melbourne officials, on the advice of Seconds coach 'Bull' Adams, decided that O'Shea was "too promising a boy and decided to retain him, placing him on the senior list".²

The Swans lamented a potential star that had slipped from their grasp, until another player by the name of Bryan Crimmins came under their notice. After playing his early senior football with the Benalla All Blacks in the Tatong-Thoona Football League, Crimmins' job as a policeman took him to Melbourne, where he played in South Melbourne's seconds, and then in 1943 to a new post at Werribee Police Station.

Crimmins played both cricket and football with the local Werribee side, where his football prowess caught the attention of the Melbourne hierarchy. The Demons applied to South Melbourne for a clearance, not expecting any resistance from the Swans, but there was a twist in the tale.

South Melbourne, who still had first call on Crimmins' services, hadn't forgotten the pre-season wrangling over Len O'Shea, and the Swans took the opportunity to use the bid as a bargaining tool. When Melbourne's formal request for a clearance arrived at Lake Oval, the South Melbourt secretary sent a terse response: "We will clear Crimmins to Melbourne if you will give us O'Shea."²

Keen to secure Crimmins, the Demons agreed to the trade. Given the interest generated by the two players at each club, officials at Melbourne and South must have looked forward to the debuts of both players with great anticipation. Ultimately, they would all be disappointed.

Crimmins was named as 19th man for Melbourne for the Round 12 game against Richmond. He replaced the injured Frank Scanlan in the last quarter of that match³ but, whatever limited chance he had to impress, it was not enough for him to retain his place. Crimmins was never again selected by the Demons, and joined a very long list of players who have made only a single VFL appearance.

A week after Crimmins' appearance, O'Shea pulled on the red and white jumper for the first time. Like Crimmins, O'Shea was also selected as 19th man and he replaced Brian Kelly, who sprained his ankle, in the third quarter. The correspondent for the Emerald Hill Record, the local South Melbourne newpaper, was not impressed by O'Shea but offered a possible excuse: "Len O'Shea was not impressive. It is said that his opportunities for practice are few and far between, which may account for the hesitant and slow-moving manner in which he went for the ball."⁴

South selectors were also willing to excuse O'Shea's first-up performance and he was selected again the following week. The Swans easily accounted for St Kilda, and O'Shea kicked one of South's 10 goals, but he was omitted the following week, his VFL career ending on a total of two games. 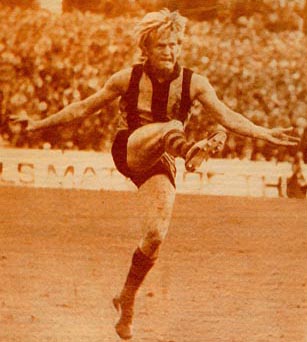 Crimmins later became better known as the father of Hawthorn captain and legend Peter Crimmins (right), while not much is known of Len O'Shea beyond the 1944 season.

While Melbourne might have been disappointed more did not come of the Crimmins/O'Shea swap, they could comfort themselves in the fact that they did not appear to lose much in the deal, as Len O'Shea himself played only two games for the Swans, kicking the one goal. South Melbourne, probably equally disappointed in the way things panned out with O'Shea, could at least claim they came out ahead in the exchange, getting a 'two (games) for one' deal!