A footy team — more or less

Andrew Gigacz takes a deep dive into V/AFL history to name a team of players whose names contain the word 'more' or 'less. The team includes famous names such as Alessio and Gilmore. 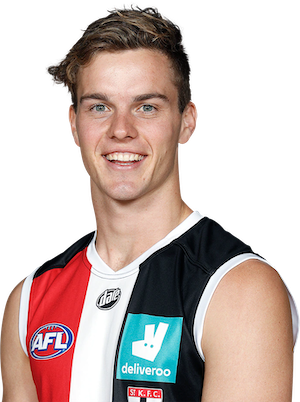 The debut of St Kilda's Tom Highmore earlier this year represented the first instance of a player in the V/AFL with that surname. But Tom is by no means the first league footballer to have a surname with a suffix of '-more'. In 1903, Bart Dinsmore became the first, also for St Kilda, playing in the Seasiders' last two matches of the season. Despite kicking three goals in those two games, he never played another VFL match, leaving some to ponder whether Dinsmore deserved more.

While Bart was the first VFL player to have a surname with "-more" as a suffix, an earlier league player had one which began with "More". Joe Morehouse made his VFL debut — again for St Kilda — in 1898, more than five years before Dinsmore. Coincidentally, both Morehouse and Dinsmore made their debuts against Melbourne. While Morehouse played more games than Dinsmore, Dinsmore kicked more goals.

While Highmore (right), Dinsmore and Morehouse might evoke thoughts of wanting to get higher, make more noise or own more abodes, the suffix and prefix "more" almost certainly refers to what today is spelt as "moor". A moor is defined as "a tract of open uncultivated upland, typically covered with heather". So in Tom's case, his long-ago ancestors might have lived high on the moor, while Joe Morehouse's family probably lived in the house on the moor. 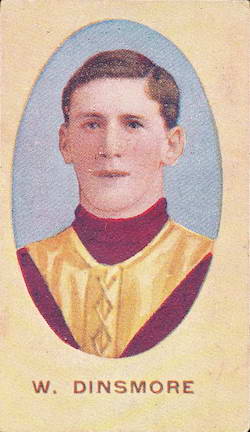 The topynomic (meaning a name derived from a place name) surname Dinsmore appears to be slightly different in its origin, the "Dins"  likely deriving from the Welsh and Cornish-British root den- for "fortress" or "fort", and the "more" from either the Gaelic root mor- meaning "great" or "mighty" or possibly the Welsh root mawr- meaning "large" or "warrior". Dinsmore, therefore, probably means "a great fortress". Presumably, then, Bart Dinsmore and Bill Dinsmore (who played for Fitzroy, Essendon and St Kilda between 1908 and 1915) were both defenders!

Other "more" surnames to have played V/AFL football include Blackmore, Bradmore, Gilmore, Passmore, Whitmore and Willsmore.

Along with the various surnames, there has been one "more" first name. Westmore Stephens played 10 VFL games for University over three seasons from 1912 to 1914.

It would be unfair to focus on only those whose names contain "more". In the interests of equality and balance, it is necessary to also look at names containing the word "less"; and there have been several of those over 125 V/AFL seasons.

Five players have had a surname ending in the "-less" suffix. The most famous of those is the burly former Geelong star Billy Brownless. In Billy's case, the "less" part of surname is rather like the "more" surnames. Rather than indicating a smaller quality, it is likely a corruption of the word "lees", with a lee being a meadow or a grassy plain. The Brownless family of names has historically included the name "Brownlees" and "Brownley", all of which are thought to refer those who hailed from Browlee in Lanarkshire, or Brownley in Warwickshire. Billy Brownless might therefore be distantly related to two other Geelong footballers, the Brownlees brothers, Rupe and Tom, who played at the Pivot more than a century ago. 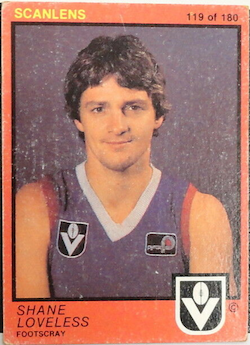 Two players with surname Loveless have turned out for VFL clubs — Ernie, who played 98 games for St  Kilda and Hawthorn in the 1920s and 1930s, and Shane, who made 28 appearances for Footscray from 1979 to 1981. A big full forward, Loveless looked like becoming a superstar for the Dogs in 1980, kicking two bags of eight goals and another of seven in that season. But his formed tapered off and his time in the VFL ended at the end of 1981.

While Ernie and Shane's surname suggest a lack of love, the House of Names website suggests the name is actually derived from the Old English word "laweles," which means "lawless" and is ultimately derived from the Old English word "laghles," which means "outlaw." As a surname, Loveless came from a nickname for a person who was an outlaw, or was uncontrolled or unrestrained.

There have also been two players with a surname of Alessio — Richmond's Harry, and Essendon's Steve. The name  Alession derives from the Latin Alexius which means to defend or to protect. While Harry was a forward and Steve a ruckman, their surname suggests they might have been better suited to the backline!

A total of 32 footballers with names containing 'more' or 'less' — 30 men and 2 women — have played at V/AFL/W since Bart Dinsmore first pulled on the boots. Appropriately, there have been more 'more' players — 22 of them — and less (or to be grammatically correct, fewer) 'less' players, 10 in total. A quarter of those 32 are Gilmores, that surname being by far the most common on the list. There are two Blackmores and two Dinsmores, and one each of Ashmore, Bradmore, Highmore, More, Morehouse, Morelli, Passmore, Westmore, Whitmore and Willsmore. 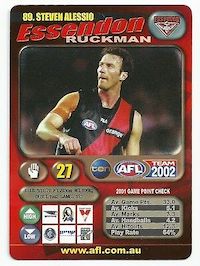 On the 'less' side of the ledger, there are two Alessios, two Lovelesses and two Melessos, with the rest of the 'less' comprising a Brownless, a Nickless, a Shalless and the magnificently named Derek Eggemolesse-Smith.

While the majority of the 32 players have names of Anglo-Saxon origin, five players add an Italian flavour to the squad, Steve and Harry Alessio, Neil and Peter Melesso, and Collingwood's Clarrie Morelli.

A ruthless team that strives for more

Here then, is a team that might score more, or perhaps less, than any other team it comes up against. No doubt when the game is over, each player will have nothing MORE to give.

I remember Phil Bradford. IIRC he wore #18 at Footscray before Simon Beasley.