Can you help Carlton find its holy grail?

Carlton FC historian Tony De Bolfo has put out a call for help to find its first Premiership trophy, which dates all the way back to 1871. Can you help? 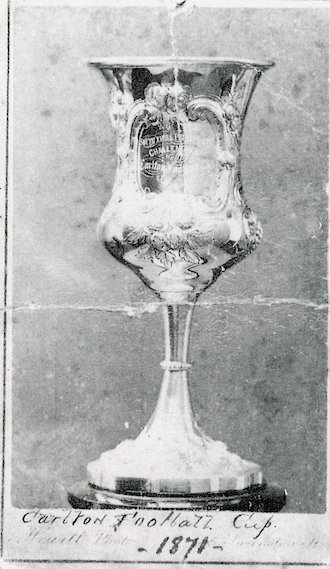 The Carlton Football Club is seeking the assistance of the general public to find its first Premiership trophy – the South Yarra Challenge Cup – of which it was granted perpetual ownership more than 150 years ago.

The cup was won by Carlton on the afternoon of Saturday, October 7, 1871, following an 18-a-side contest with Melbourne at the Albert Park ground. Captained by John Donovan, the team emerged from the three-hour contest as two goal-to-nil victors, and the victors, for the record, were as follows:

The aforementioned players, together with former captain Jack Conway who was forced into retirement through injury earlier in the season, were photographed at the Carlton Annual General Meeting on Friday, April 26, 1872, with the photo developed and printed that evening.

The handcrafted cup – availed by the South Yarra club in 1870, was one of a number of trophies contested by teams in the early colonial years, prior to the advent of the Victorian Football Association competition in 1877. The stylish silver goblet was photographed for a carte-de-visite (a Parisian form of calling card) later released by Hewitt Photographers of 95 Swanston Street – the studio Charles Hewitt occupied for a 15-year period from 1866.

Working off the carte-de-visite, an inscription on the cup appears to read: “South Yarra Presentation Challenge Cup won by Carlton Football Club”.

In 1924, a correspondent for The Herald newspaper revealed the existence of a letter penned by a Mr J. A. Power, who wrote that he was in possession of the said cup which was presented to one of the club’s founders Thomas P. Power at the Annual Meeting of 1885. The correspondent noted that the then Carlton President and former player John Gardiner was endeavouring to obtain the cup, but whether Gardiner fulfilled this objective is unknown. What is known is that a direct descendant of Tom Power recently advised that the cup was not in the family’s keep.

The Athletic Sports Committee Challenge Cup of 1865-1866 (a 20-centimetre silver cup long thought to have been lost) – resurfaced unexpectedly in 2007, having been inherited by a man in Bristol, England with no obvious connection to 1860s football – and was subsequently loaned to the National Sports Museum.

But the whereabouts of the 1871 South Yarra Challenge Cup remain unknown.

The Carlton Football Club is interested in showcasing the 1871 South Yarra Challenge Cup in its newly refurbished historical display at the redeveloped IKON Park.

Can you help Carlton find its Holy Grail? If so, please contact tony.debolfo@carltonfc.com.au.