For the sixth time, the Bulldogs and Blues were entwined in a last-round battle for finals in 2022. Andrew Gigacz looks at all six chapters of this ongoing saga. 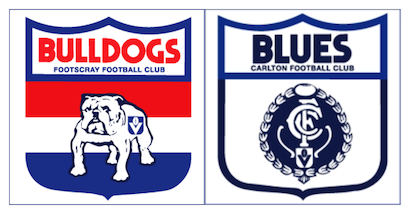 Way back in 1981, Split Enz had a hit song called 'History Never Repeats'. But you ask a Dogs or Blues fan who's been around for more than 50 years, they'll probably tell you that title doesn't ring true.

The Western Bulldogs and Carlton have never met in a final, and the events that set up this year's incredible AFL season climax means they won't be crossing paths this September either.

But while they may never have faced off in a final, the Dogs and Blues have had a long history of interacting in one way or another in the last round of seasons when one or both of them has been seeking a place in the finals. Here’s a look at this ongoing saga, which stretches back to 1942, and had its sixth and latest chapter a couple of weeks ago.

Footscray and Carlton went into the final round level on 11 wins, with Dogs in fourth place, ahead of the fifth-placed Blues by percentage. The Blues had a big win over Richmond by 53 points but the Bulldogs got the job done against Fitzroy to hold on to fourth place and make VFL finals for the second time.

Going into the last round of 1944, Carlton were in third place on the ladder with 12 wins, Essendon were fourth, also with 12 wins and Footscray were fifth, half a game behind the Blues and Dons.

Essendon had a win over South Melbourne, leaving the fourth and final place in the finals to the winner of the Footscray vs Carlton match at Princes Park. In a thrilling finish, the Bulldogs – thanks in a big way to Norm Ware, who kicked six goals – hung on to beat Carlton by just one point, to steal a place in the finals from the Blues.

A dozen years later, the Blues and Dogs met again in the final round, once more at Carlton’s home ground at Princes Park. Carlton, fourth, went into the last round half a game clear of Footscray, fifth. 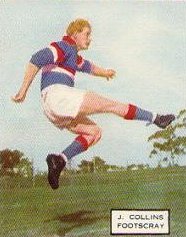 In front of a bumper crowd of nearly 45,000, the Dogs led a close match for most of the afternoon, winning by 17 points, with Jack Collins' three goals perhaps the difference. As a result of the win, the Bulldogs replaced Carlton in fourth spot and claimed a place in the finals.

Footscray went into the final round in fifth place, a game clear of Melbourne but with an inferior percentage. The Dogs were drawn to play top-of-the-ladder Carlton in the last round, while Melbourne had an ostensibly easy game against bottom-placed Collingwood. The Demons got the win, but the Dogs, who took a 22-point lead into the last quarter, held on for a dramatic draw with the Blues to claim a finals place by half a game. 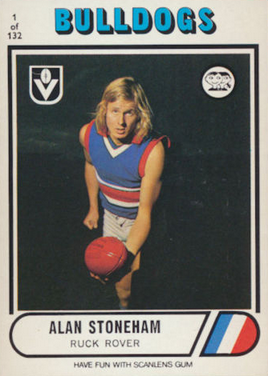 Carlton, having been in the top five for the entire home-and-away season, went into the last round half a game clear of South Melbourne. Sixth-placed South were to take on North Melbourne (third) at Arden St, and Carlton (fifth) took on Footscray at Western Oval. The Dogs were seventh and out of finals contention, but could at least help shape the top five.

With Alan Stoneham starring, the Dogs were 38 points ahead at the final change, but Carlton players were perhaps not too worried as news filtered through that South were 23 points down a few kilometres away. The Dogs held off the Blues to win by 18 points, and as the players walked off word came through from Arden Street that the Swans has kicked six goals to one in the final term to pinch victory and a place in the finals – at Carlton’s expense – with the help of the mighty Dogs.

It would be 45 years before the next chapter in this story was written, but it finally came this season. Just as they had in 1977, the Blues had spent the entire season in the qualifying bracket of the ladder (this time a top eight). But this time around, rather than playing the Bulldogs, they would be vulnerable to losing that place in the eight to the Dogs.

To steal Carlton’s place, the Western Bulldogs needed to first beat Hawthorn in Tasmania, and then hope the Blues would lose against Collingwood at the MCG. The Dogs took a while to shake off the Hawks, but got the job done. 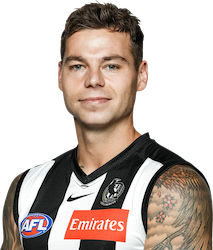 Then came the waiting game, with the Blues-Pies match starting two hours later than the Dogs’ match. Bulldogs players watched from the Launceston airport as Carlton jumped four goals clear at three-quarter time. The Dogs’ season looked over.

But a remarkable last-quarter fightback by the Pies gradually closed the gap before a goal to Collingwood’s Jamie Elliott (left) with only minutes remaining put them ahead. The Magpies held on to win. The margin was a solitary point, but that was enough for the Bulldogs to claim a place in the finals for a fourth consecutive year.

The jubilant Bulldogs celebrated wildly at the airport lounge. Another triumphant chapter in the epic Dogs-Blues last-round saga had been written.

Great article Giggs. I remember the final round in '76. As a 13 year old i spent the whole afternoon listening to the match on the radio in our dining room. Nail biting stuff as we held on for the draw. Looks like we've had the wood on the blues on the majority of those final days. Long may it continue.