Equal opportunity for Cazaly and co

The list of two-club V/AFL players runs into the thousands but only 62 of those, Andrew Gigacz reveals, have played exactly the same number of games for each of their clubs. 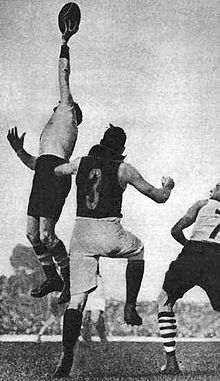 Roy Cazaly is a name known to all footy fans and, thanks to being immortalised in song by Mike Brady, many non-footy fans, too. Cazaly was a star VFL footballer, first at St Kilda and later at South Melbourne, where the legendary catch-cry "Up there, Cazaly" was born.

Many fans know the Roy Cazaly story but what most probably don't realise is his unique games record at his two VFL clubs. After 99 games for the Saints, Cazaly (right) moved to the other end of Albert Park Lake in 1921 and joined South Melbourne. Over the next seven years, he became a stalwart at the Bloods but his time there also came to an end after 99 games.

Two clubs and 198 VFL matches, but poor old Roy didn't get to celebrate 100 at either!

Cazaly is the most famous member of a club for which very few V/AFL footballers qualify – those who played an identical number of games for two clubs. Only 62 of the many two-club V/AFL players have turned out for each of their clubs in equal measure. As well as being the most famous name on the list, Cazaly is the most prolific. To date no player has racked up an identical three-figure games total at two clubs.

A couple have come close. The late Ian 'Bluey' Hampshire played 113 games for Geelong before travelling up Geelong Road to Footscray, where he played 111 more matches. Hampshire hung up the boots in the middle of the 1982 season to take over the coaching role from the sacked Royce Hart. If the club had held off for a fortnight, 'Bluey' could have been the clubhouse leader with twin totals of 113!

Behind Cazaly comes a group of pretty handy players. Here's a look at some of those.

The nearest 'equal opportunity' player to Cazaly in terms of games played is Gerald McCarthy. In a career that spanned 1972 to 1982, McCarthy played 75 games for each of Hawthorn and Fitzroy. Having played 17 games in 1975 and 16 in 1976, he was unlucky to miss out on Grand Final selection in both years. He would likely have played one in 1977 but he was part of the team that lost the preliminary final in that year. 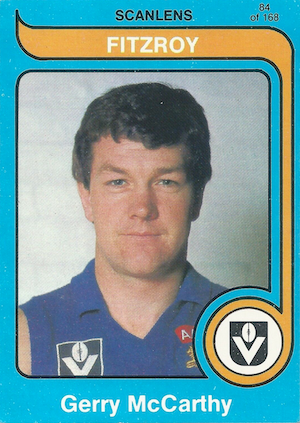 After that prelim loss, McCarthy found himself at Fitzroy. The Lions certainly got good service out of him as he doubled his VFL games tally, but the Hawks probably got the best of the deal. In return for McCarthy, they received the untried Terry Wallace. Wallace played all 25 matches in 1978, the 25th being a Grand Final win over North Melbourne.

Diminutive Dick Abikhair arrived at Hawthorn from Rushworth in 1934 and over the next five seasons played 60 games in the back pocket and as a part-time rover. He was seen as solid if unspectacular player in those five years but when he joined North in 1941 after missing two seasons serving in the RAAF during World War II, he gained a reputation as a defender of great class. His 60 games as a Shinboner in five seasons mirrored his time as a Maybloom.

An Ovens and King League product, Mark Porter came to Carlton via Coburg in the VFA and was only a few months shy of his 21st birthday when debuted for the Blues in 1997. The 199 cm ruckman played second fiddle to Matthew Allan in his time at Princes Park, which in an era where most clubs played two in the ruck, wasn't as bad as it might sound.

In their efforts to secure Corey McKernan in 2002, Carlton traded Mark Porter to North Melbourne. He had played 55 games in navy blue over five seasons (missing 1999 entirely with a knee injury) and he added exactly 55 more to his tally with the Kangaroos over three seasons from 2002 to 2004, sharing the ruck duties with Matthew Burton. 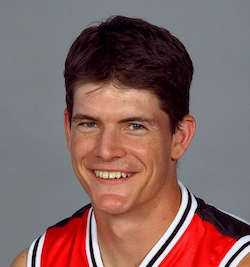 Running defender Damien Ryan (right) seemed to establish himself in Richmond's back half after debuting in Round 9 of the 1996 season, playing 11 games that year. But his career stuttered after that and he managed only nine games in 1997 and 10 in 1998. A move to the Saints seemed to reignite Ryan's career and in 1999 he played 20 of a possible 22 games but after only sporadic appearances in 2000 and a run of five games in 2001, Ryan's card was marked and his 60-game career divided neatly into two three-year/30-game halves came to a close.

A high pick (number 6) in the 1999 AFL draft, Ben Fixter kind of lived up to his surname, playing a fixed number of games — 27 — for each of Sydney and Brisbane. He took five seasons to get to that number at the Swans, mainly due to injury, but reached it in just two seasons with the Lions.

Keith Batchelor's career may have only spanned 42 games but he crammed quite a bit into them, especially the first 21. In fact his very first match was a Grand Final, and it wasn't until Marlion Pickett made his debut for Richmond in 2019 that a player kicked off his V/AFL career in a premiership decider. Batchelor's debut didn't go very well. Playing at full back, his opponent George Goninon kicked five goals as Collingwood went down to Geelong. 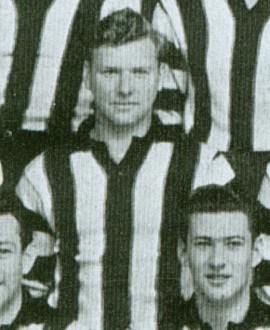 A year later, though, Batchelor's role was reversed and so was the result. He lined up at full forward and kicked four goals as the Pies got Grand Final revenge on Geelong. It was just Batchelor's 10th VFL game. His 21st and last game for Collingwood was another Grand Final (1955), sadly a losing one to Melbourne. Batchelor (left) then crossed to North Melbourne and in his two seasons at Arden Street he doubled his game tally before his VFL time came to an end.

Algy Millhouse holds a special place on the Equal Opportunity list as the only footballer (other than John Somer, one of the 22 players who played one game each for two clubs) to play all of his games in a single season.

Millhouse was a star Norwood player in the SANFL who came to Melbourne in 1913 to try his hand in the VFL. He turned out for Melbourne in the opening round and played the first 10 games of the season without really setting the world on fire as the Fuchsias won just one of those games. After missing Round 11 he found himself at St Kilda where he again played 10 matches in a row. Eight of those 10 were wins, though and Millhouse found himself in a Grand Final in just his 20th VFL match. Sadly, it was a loss, and Millhouse returned to Norwood as captain-coach in 1914.

In all 62 players qualify for the V/AFL 'Equal Opportunity' club. Others may join in time, but only if they get their timing and numbers just right! The full list of players follows. 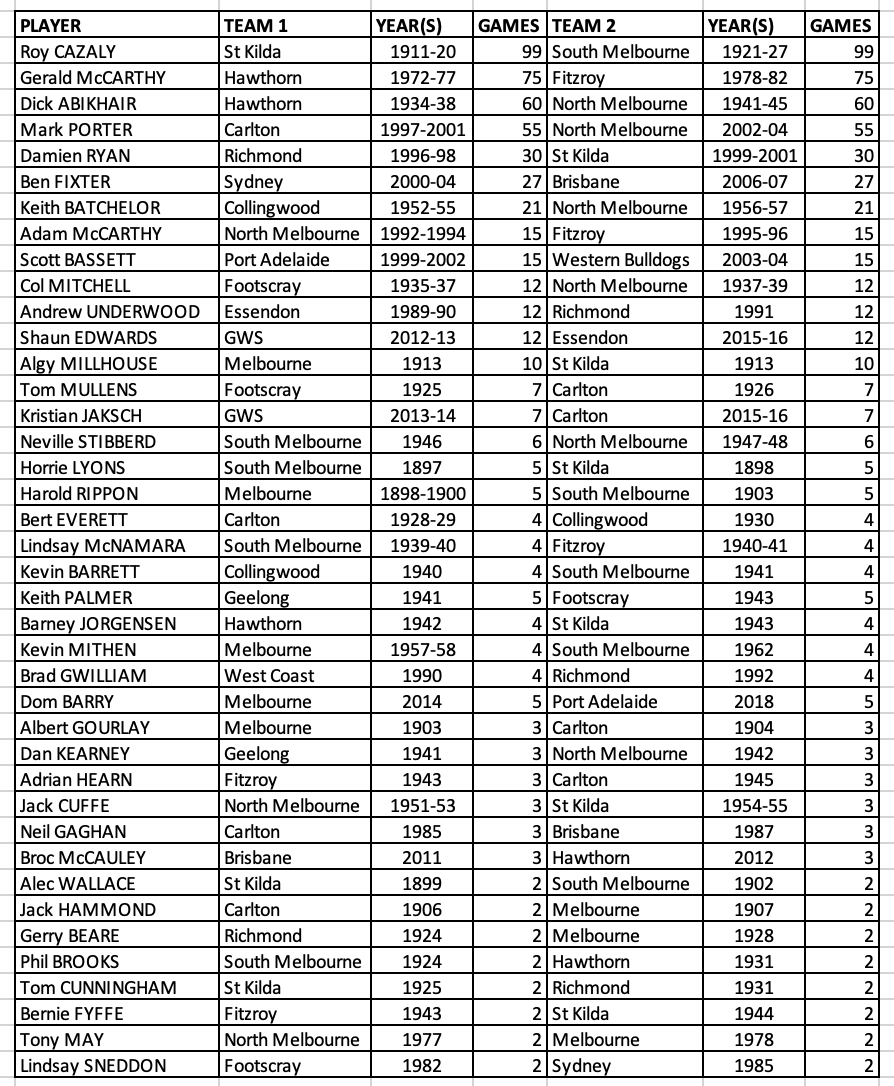 There are 22 players on the list who made a solitary appearance for each of their two clubs. I wrote about this group more extensively in this article in 2021.

Here they are in order of appearance: 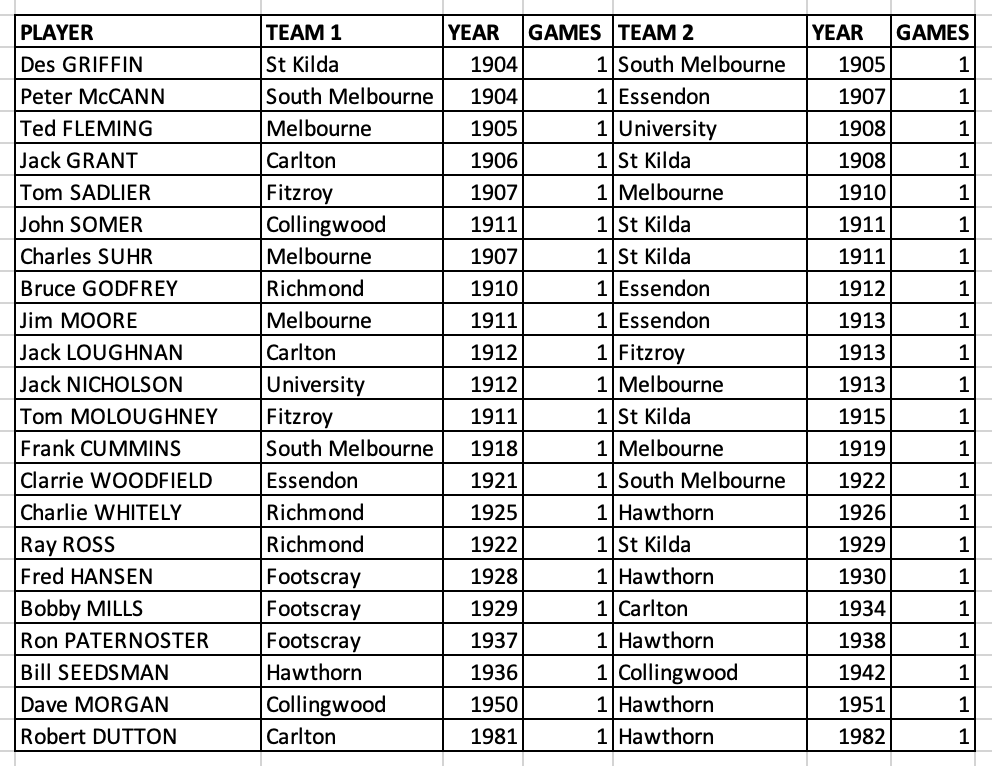