Jeff Dowsing takes us through from the late 70s to the mid 80s in part six of his wonderful Era, Era series.

Many a footballer of the late ’70s to mid ’80s vintage count themselves lucky to have played in the big league when they did. Whilst few earned enough to set themselves up for life, they at least lived comfortably and without a sensationalist media tracking their every word and movement. As a spectator there was also much to commend the ‘Victorian’ League’s final decade.

Fuelled by compelling characters and tough, attacking football played on suburban dung hills and VFL Park’s great expanses, the game powered to a peak in 1981. One home and away match at Waverley between Collingwood and Hawthorn shoe-horned over 90,000. Gridlock in the carpark commonly ensued and many a child’s bladder would threaten to burst in the back seat of the Falcon.

The Junction Oval scoreboard spun like a pokies machine for Fitzroy and St Kilda in 1983; 19 goals in one quarter!

Throughout this time (framed by Allen Aylett’s ascension as VFL Chairman and the beginning of a national competition), team score averages topped 100. An all-time high of 112 was reached in 1982. This represents 25 points more per team than today’s spectacle. The prolific full forwards of the early ’70s passed the baton to a brace of replacements who kept the white calicoes waving. After Hudson’s last hurrah in 1977 (110 goals), Templeton, Roach, Blight, Quinlan, Beasley, Capper and Taylor all raised the ton, albeit none quite matched the enduring feats of Huddo and McKenna.

Despite many skilled ball magnets such as Bartlett, Matthews, Ashman, Daicos, Flower, Watson and Garry Wilson, it was an age when big men were better recognised for their influence. Four Brownlows were awarded to ruckmen (Teasdale, Round and Moore x 2) and four to key forwards (Blight, Templeton, Quinlan and Glendinning).

Red shorts, Templeton kicks 15 and a farcical crowd invasion (including Footscray coach Don McKenzie). What’s not to like?

Clubs – good, bad and indifferent – all hell bent on instant success, threw money at footballers despite the fact most couldn’t spell professionalism, let alone understand what it entailed (notwithstanding a majority of players also worked regular jobs). Duffle coated diehards became exasperated by established heroes such as Moore, Templeton, Teasdale, Quinlan, Dempsey and Raines who changed colours as readily as their jock strap. The ‘Pies and Tigers in particular engaged in a futile poaching war. Meanwhile Allender, Cox, Foschini, Paul Morwood, McLean and Buckenara counted among the names who railed against the prevailing transfer rules which, good intentions aside, verged on restraints of trade.

“We won on the ground and all their lawyers can’t take the four points away from us. It’s a shame football has come to this.”
- Embittered Swans coach Ricky Quade on Morwood and Foschini’s defections to St Kilda

Arguably, to their detriment, the WAFL and SANFL competitions showcased their talent in some wonderful State of Origin encounters. As a consequence they were pillaged. Hardie, Platten, Kernahan and Bradley followed the likes of Maurice Rioli, the Krakouer brothers, Bosustow, Hunter, Peake, Buckenara and many more. Most fired, a few backfired, and ultimately the spectacle was all the better for the injection of this mysterious A Grade talent from over yonder.

Another avenue to which Victorian fans were prepped for a national competition was the old night series (rebirthed in 1977) which featured interstate clubs. It seems incomprehensible now that a quasi FA Cup format, played alongside the main competition on a Tuesday night at VFL Park in the depths of winter, endured 11 years before moving to a more purposeful and fan-friendly preseason.

“It took some time for me to really believe I was good enough to play football alongside that man.”
- Hawthorn recruit Gary Ablett referring to Leigh Matthews in 1982

The looseness of the time was evident on-field. Heroes and villains such as Percy Jones, Kink, Carman, Muir and Jacko made the live experience compelling. Send in the clowns was perhaps a more appropriate VFL anthem than Up there Cazaly. Another joker, Ray Byrne, presented Kevin Bartlett a toothless comb before a game whilst off-field Lou Richards was at the height of his fame, front and centre in many a public prank.

Of course there was collateral damage, and as skilled as the Hawks and Bombers were at the peak of their rivalry, so-called ‘hitmen’ in Roger Merrett, Ron Andrews and Dipper provided an advantageous intimidation factor. Few came off worse than Neville Bruns in 1985. The subsequent police assault charge laid against Leigh Matthews was unusual, and the incident itself a catalyst for trial-by-video. A frosty Coach’s Corner exchange on World of Sport the next day gave new meaning to the lunchtime Sunday roast (popular in the day).

The relocation of South to Sydney in 1982 proved as tumultuous as Matthews’ final season. In a sad way Dr Geoffrey Edelston is still attempting to recapture his heady sugar daddy days with Leanne at the SCG, when the tiny togged Warwick ‘I only take what’s mine‘ Capper worked wonders as a marketing tool. The ‘Eighties certainly weren’t short on bruising, flamboyant, high flying excitement. The VFL had already dipped its toes in showbiz pre-Sydney. Barry Crocker paved the way for decades of cringeworthy crooners when he sang at the 1977 Grand Final, meanwhile the Bluebirds (followed by the Swanettes) provided a pleasant distraction for pubescent boys and men folk in the outer.

The footy experience remained an egalitarian, affordable escape from the drudgery of school or work. A two-can limit (per purchase) was a bummer for some, but a boon for family goers and a fair response to the tragic death of a spectator at Princes Park (hit whilst protecting his six-year-old son in 1982). Rusted-ons rode the fortunes of their team week-to-week at their familiar, if not luxurious home terraces, and every second week at not so hospitable away digs. Other relics, such as dressing gowns, also endured.

“I didn’t mind the media guys, blokes like Peter Simunovich, Mike Sheahan, Trevor Grant and Mick Davis, because they used to write the truth. That must just have been the way papers were then. Now they write shit.”
- Essendon Hall of Fame inductee Kevin Egan

A win demanded a quick dash home to catch a replay on Seven’s Big League, with Palmer’s Punchlines a must-see. A quarter of TV viewers watched Peter Landy introduce the best of the day’s action and another 7% tuned into Channel 2’s replay. Sundays offered up The Winners, World of Sport and either the VFL Reserves or the Swans if they were at home. There was no shortage of print coverage either with the The Age, The Sun, The Herald, The Truth, Inside Football and the Sporting Globe all viable publications.

Despite all the excitement, as the 80s wore on crowds slumped to levels not seen since the early 1950s. The game’s ills were illustrated by Seven’s downsized (and rejected) offer of $2.7m for TV rights in 1986 (they paid $3.5 the year before). Whilst both amounts represented a sizeable leap on the 1977 figure of $200,000 per annum, it clearly wasn’t enough to pay the VFL’s bills.

The wily Kevin Sheedy’s baby Bombers finally grew up and battled the Blues and Hawks for the spoils, yet underneath it all the game had stagnated. Besides gallant efforts by perennial battlers North, Footscray and Fitzroy (whose coach Robbie Walls pioneered ‘the huddle’ kick-out strategy), September was a largely predictable affair.

As a result of a largesse that dated back a decade or so, five of the 12 clubs slid into technical bankruptcy, and another three teetered on the brink. The changing club/player/sport/business dynamic was superbly portrayed by the feature film The Club (1980) conceived by playwright David Williamson, and the screenplay couldn’t have chosen a more appropriate team. By the mid-80s the once mighty Collingwood was but a phone call away from being wound up by their bankers, having spent a motza on, to quote fictional Magpie coach Laurie Holden, ‘the wrong bloody players!’. And for the nomadic Lions, leaving the Junction Oval for Victoria Park was another step towards being placed in palliative care.

“The truth is that Australian Rules football is designed for daytime, with the old fashion wind, rain and sunshine, using a leather ball on odd shaped grounds.”
- The Age columnist Garrie Hutchinson, 1980

Alas, Allen Aylett’s grandiose visions of a national competition weren’t shared by the fans, nor club administrators. Attempts to merely introduce Sunday matches and night football were a battle. The public mood was encapsulated by a chorus of booing directed his way at the 1984 Grand Final.

Powerful enemies John Elliott and Ian Collins weren’t the caring, sharing type and their fight against football socialism, particularly gate revenue equalisation, led to them secretly plotting a breakaway national league. Aylett fretted as days of reckoning approached. Who was going to save the clubs from themselves? Little wonder Aylett’s national obsession didn’t quite materialise under his watch.

With hardened businessmen such as Elliott, Lindsay Fox (St Kilda), Bob Ansett (North) and Ranald MacDonald (Collingwood) calling the shots, of course the only winner would be self-interest. Only when the sick and sorry hierarchies realised an independent body was the only remedy could Aylett’s dream become reality. The overdue creation of an independent VFL Commission in 1985 proved one of football’s great watershed moments. No more baby steps – with the power no longer vested in the clubs, big changes were afoot.

To summarise 1977-86, as one of the star goal slingers who typified the era of excess would say, "WOWEE‘"! Teasdale dominated 1977 in every way, to the embarrassment of his lady friend. Lou regretted this 'Kiss of Death' bet more than most. Harmes knocks the ball back from the foyer of the Hilton Rumour has it Perce was bottle-fed as a baby It seemed like a good idea at the time 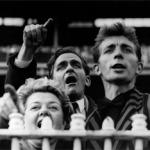