Fitzroy Pete, aka Peter Carter has released a book that will warm the cockles of all Lions' fans, young and old.

Fitzroy — the erratic genius of the VFL/AFL. A team that inspired one week and infuriated the next. This inconsistency added to the charm of a club that is sadly missed in the “Big League”. True, the Brisbane Lions carry the Roys’ torch in the AFL and Fitzroy itself flies the flag proudly in the Victorian Amateur Football Association, based back at its spiritual home in Brunswick Street. But nothing can replace the joy the Roys, Maroons, Gorillas, Lions — the Royboys! — gave to so many during their 100 years in the top flight.

Fitzroy’s VFL/AFL life began in far better style than it finished. In Round 1, 1897, after kicking 11 behinds in the first half without a goal, the Maroons overran the visiting Carlton to win 6.13 (49) to 2.4 (16). The Roys were on top of the ladder with an impressive percentage of 306.25. There were many fine days ahead. Some 1927 games later in Round 22, 1996 — after being one of just three teams (Carlton and Collingwood were the others) to compete in all 100 VFL/AFL seasons — Fitzroy bowed out with an 86-point loss to Fremantle at Subiaco Oval. Sadly, the Lions finished on the bottom with a dismal percentage of 49.47. Their only 1996 victory was, coincidentally, against the Dockers at the Western Oval in Round 8. 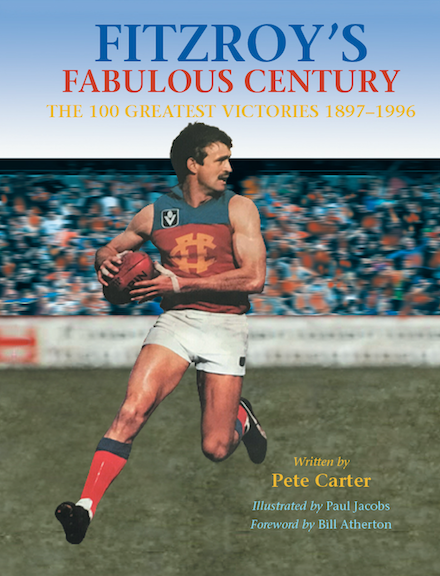 These two wins and 98 others are discussed in depth in Pete Carter’s Fitzroy’s Fabulous Century: The 100 Greatest Victories, 1897-1996. Pete has split the 100 wins into four distinct quarters, with a suspenseful countdown from 100 to 1. Some victories will be fresh in the minds of devoted fans, while others — including the first game of 1897 — require access to a time machine. Pete doesn’t possess a time machine but, through online newspapers and his extensive sports library, has taken readers back in time to savour some of the Royboys’ finest moments.

There are detailed reports of the club’s eight league premierships, beginning with 1898 and finishing with 1944 (when the team was known as the Gorillas). The other victories include wins by 100-plus points, games where a Fitzroy player booted a double-figure goal tally, boilovers, comebacks, controversial encounters, last-ditch finals entries and thrillers. You name it, it’s there, with some victories falling into multiple categories.

During the quarter, half and three-quarter-time “breaks”, Pete has explored other aspects of Fitzroy’s fabulous century, including the seven Night Series, reserves and Under-19 premierships. Even if you never followed the Roys, reading about some of their great performances will leave you wondering how the AFL Commission could even consider — let alone act upon such a misguided thought – throwing Fitzroy out of the competition.

In a profile on australianfootball.com, footy historian John Devaney described Fitzroy as “worldbeaters at the start of the (20th) century; out of business by the end of it”. He also gave a glimmer of hope to those who dream of a Roys return. “The possibility of Fitzroy re-emerging as a senior football club in its own right at some time in the future is slim but nevertheless, in theory, achievable.” Wouldn’t it be wonderful if John’s scenario eventuated?

In this article:
Fitzroy