To win more than four AFL premierships as coach would be a remarkable achievement. As Andrew Gigacz reports, it was an unattainable mark for Tom Hafey, and has been for every coach since. 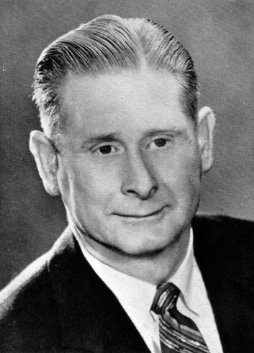 Part of footy folklore for more than 50 years has been the so-called 'Curse of Norm Smith'. In 1965, despite being Melbourne's reigning premiership coach and having led the Demons to finals every year for the previous decade—collecting an unprecedented six flags in that period—coach Norm Smith was sensationally removed from the post by the club committee in July.

The move shocked all and sundry and was seen by many as farcical. Melbourne had lost to Richmond the Saturday prior but were still sitting in third place on the ladder. There were clearly other underlying tensions between committee and coach which led to the decision. In any case, after the Demons crashed to a 21-point loss against lowly North Melbourne on the following Saturday to tumble out of the top four, a truce of sorts was declared and Smith was reinstated to his post only a week later.

But the damage was apparently done. While the Demons scraped a win against lowly Fitzroy in Smith's return match, they collapsed to lose their final four games and miss the finals. It would be more than 20 years before they competed in finals again. Smith coached on at Melbourne for two further seasons, winning only 11 of 36 matches as the air of invincibility the Demons had held for more than a decade evaporated almost overnight.

50 years after his departure, Melbourne is still sitting on 12 flags, as they were in 1964, their premiership drought now the longest in the land of the AFL, and footy folklore attributes the Demons' unbroken stretch without success to the events of July 1965. To all, it is known as Norm Smith's Curse.

There is perhaps another lesser-known 'curse' that exists in the V/AFL coaching world. While Smith is one of four coaches to have won five or more premierships¹, no one since has been able to attain such lofty heights. 'Hurdle', rather than 'curse' is perhaps a better word, as it is hardly a curse to have won four premierships! 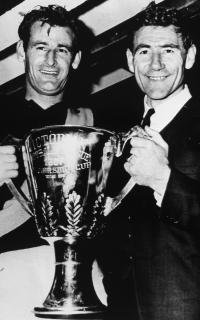 While Norm Smith's coaching reputation was taking a beating in his last season at the Demons in 1967, another coach's star was rising. In just his second season at Richmond, 36-year-old Tom Hafey took the Tigers to a premiership, ending 24 years in the wilderness for the proud club. That flag kicked off Richmond's greatest era and, under Hafey's guidance, the Tigers won further premierships in 1969, 1973 and 1974.

Four premierships in eight seasons is no mean feat, and since Hafey and Richmond performed it, it has been achieved only twice.² As impressive a feat as it was, it did not prevent Tom Hafey from being effectively sacked at the end of the 1976 season, only two years after that fourth flag, and a mere 12 months after the Tigers had come within three goals of another Grand Final appearance.

But in the mid-1970s, Richmond—both the man (Graeme Richmond, the club president) and the club—were ruthless, and success was defined by nothing less than a premiership. With two years having passed without a flag, Hafey was moved on. With the benefit of hindsight, most would agree that decision was flawed. A period of two years without a flag was, of course, not the sole reason for Hafey's demise, but it was a significant factor. If Kevin Sheedy had been removed after the Bombers failed to win premierships in 1986 and 1987, he would not have taken them to further flags in 1993 and 2000. More recently, Alastair Clarkson failed to follow up Hawthorn's 2008 premiership with another one over the next four seasons. If the Hawks had adopted the 1970s Richmond mentality and not stuck the course with Clarkson, would they have won three flags in a row in 2013-15?

Hafey's demise is therefore difficult to comprehend. His removal certainly didn't help Richmond in the long term. The Tigers did manage another flag under Tony Jewell in 1980 but then endured a premiership drought of their own which was not broken until 2017, almost four decades later.

Despite taking Collingwood and later Sydney into multiple finals campaigns, Hafey himself was unable to snare an elusive fifth premiership as coach. And neither, in the five decades since Hafey coached Richmond to the 1967 flag, has anybody else. 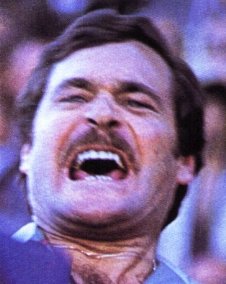 Many coaches have matched Hafey's record, but none have beaten it. When North Melbourne won a second premiership in 1977, it gave Ron Barassi (left) a total of four flags as coach. He would coach the Kangaroos, Melbourne and Sydney for another 11 seasons without winning the ultimate prize.

The year after Barassi won his fourth premiership, David Parkin took Hawthorn to his first, against North Melbourne, in what would be Barrasi's last Grand Final appearance as a coach. Parkin would later take Carlton to flags in 1981, 1982 and 1995, but a fifth would elude him also, the Blues' 1999 loss to North Melbourne as close as he would come. A year later, in 2000, Kevin Sheedy coached Essendon to his fourth flag, the first three having come in 1984, 1985 and 1993. Like Parkin, Sheedy took his charges to one more Grand Final—in 2001—but that, too was a loss, to Brisbane.

That Brisbane win in 2001 was a second flag for Leigh Matthews, his first the drought-breaking Collingwood premiership of 1990. Matthews would take the Lions to further flags in 2002 and 2003 but as it was for Barassi, Parkin and Sheedy before him, his last Grand Final as coach would be a loss (in 2004 to Port Adelaide).

Allan Jeans was perhaps the unluckiest of the 'four flag' coaches. Illness saw him sit out the 1988 season while Hawthorn won another flag under the stewardship of his assistant Alan Joyce. And Joyce steered the Hawks to yet another premiership in 1991 after Jeans' ongoing health issues forced him to step down again. Jeans could perhaps have cleared the hurdle and won six premierships, but it was not to be. 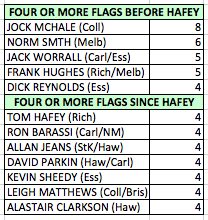 Other very fine coaches have won fewer than four flags. No one would question the coaching greatness of John Kennedy (three premierships), who transformed Hawthorn from laughing stock to powerhouse; or Mick Malthouse, who took perennial underachievers Footscray—a club run on the proverbial smell of an oily rag—to within a whisker of a Grand Final before winning three flags with West Coast and Collingwood.

As the 2018 season approaches, it is another Hawthorn coach who looms as the 'man most likely'. Alastair Clarkson reached the mythical 'four' mark in 2015 but the Hawks have since slid, to a 'straight sets' finals exit in 2016 and a non-finals appearance in the 2017 season. But the latter stages of 2017 saw Hawthorn turn things around. After winning just one of their first six matches this year, the Hawks won 10 and drew one of their last 16, at one stage threatening to sneak into the finals.

If Hawthorn can bounce back quickly to ascend the AFL mountain once more and claim another flag, it will be a testament to the coaching genius of Alastair Clarkson. And he will go down in history as the coach who finally jumped Hafey's Hurdle.

1. Jock McHale coached Collingwood to eight premierships and Smith himself led Melbourne to six flags, while Jack Worrall and Fred 'Checker' Hughes each coached five VFL premierships.
2. Three times if 'overlap' is allowed, all by Hawthorn, between 1983 and 1989, 1986 and 1991, and 2008 and 2015.