During the height of the ‘White Australia’ policy, one man overcame adversity on the battle field and prejudice on the football field to become a hero of both. Robert Allen tells the story.

Leslie Henry Kew Ming was not the first footballer of Chinese descent to play Australian football, but he was one of the best and certainly one of the most influential. After Kew Ming finished school, he learnt the bootmaking trade from his maternal grandfather Cum Moon in Minyip. The young Les showed early promise as a runner, and also played district football and cricket. Historian Carol Holsworth believes his sporting abilities probably helped him gain a measure of acceptance at a time when those of Chinese descent were often viewed with mistrust by the wider community. Indeed, football was one way of building bridges between communities; historian Rob Hess points to accounts from the late nineteenth century of Chinese Australian footballers playing charity matches to raise funds for local hospitals and other benevolent causes.

Returning to St Arnaud, the teenage Kew Ming became an enthusiastic member of the local rifle club. When World War I broke out he wanted to enlist, but although he was supremely fit and had been in the army cadets, joining up was not that simple. Under the military regulations of the time, enlisted men had to be “substantially of European origin or descent.” Based on his analysis of the 1911 census, military historian Alastair Kennedy estimates that Kew Ming was one of probably only around a thousand men of Chinese descent who were born in Australia and therefore eligible to serve.

According to his enlistment papers, Private Kew Ming was 19 years old and 5 feet 7½ inches tall, with a dark complexion, black hair and brown eyes. He embarked for Europe in October 1916 and his military career began somewhat inauspiciously when he was sentenced to 24 hours detention in the troop ship’s brig for insubordination. Arriving in Plymouth in early 1917, he trained at the 2nd Division base camp before joining the 23rd Battalion of the 6th Australian Infantry Brigade in France. Wounded in the shoulder in May, he was promoted to Corporal soon after. In October that year, Kew Ming was again in the thick of the action. During the first Paschendaele offensive, he led a party of men to dig a communication trench to a newly captured front line at Broodseinde Ridge. He was awarded the Military Medal for his bravery, the citation stating that “he set a fine example to his men and encouraged them to complete the work though under heavy shell fire. Remained on duty though wounded …” It is interesting to note that Alastair Kennedy’s research shows that soldiers of Chinese Australian descent proportionally received a much higher number of gallantry awards during World War I than others in the AIF.

To cap off an eventful year, Kew Ming won a relay race medal while representing the 23rd Battalion at an AIF sports meet in Belgium. According to “The 23rd”, a newsletter printed on the battlefield, he also featured in a 440 yard race and was prominent in ‘A’ company’s football win over a rival company. Kew Ming was promoted to Sergeant in February 1918. He survived the rest of the war without serious mishap and returned to Australia in 1919 keen to continue his football.

He moved to Wedderburn to resume his bootmaking business, and was part of the side which won the local premiership in 1920. He then came to the attention of North Melbourne, which was a powerhouse VFA club in the years just before its admission to the VFL in 1925. Details of his career with North are sketchy, but he played half back during the 1922 season and was among the team’s best in their preliminary final loss to Port Melbourne. A series of injuries culminating in a broken collarbone against Footscray put an early end to his 1923 season. Kew Ming’s running, however, continued to improve and in 1925 he won the Shepparton Gift off ten and a half yards. A photo of him wearing the winner’s sash shows a strong and powerfully built athlete.

Around this time, Kew Ming married his sweetheart Vera and was lured to Echuca by a new business venture and the promise of further football. He quickly became a stalwart of Echuca’s backline, where he was best known for his phenomenal kicking. His booming kick ins from full back were a feature of his game and he used to delight in recounting one particular tongue-in-cheek story that involved his team mate George Ogilvie: “Can that George Ogilvie kick! I remember one day I kicked off, George marked it at centre half forward, turned and kicked a goal.”

Kew Ming was regularly picked for representative football teams, and in 1927 he was among the best in a Bendigo League team which defeated a combined VFL team by one point. He was also instrumental in Echuca’s premiership win the following year.

Kew Ming may have been a war hero, but he still copped racial abuse when he played football. He never complained about this treatment, but his wife couldn’t bear to watch him play because of the taunts from sections of the crowd.

In 1928, Melbourne’s Sporting Globe newspaper announced a national distance kicking competition, with a prize of 25 pounds to anyone who could kick the furthest place, drop and punt kick. Kew Ming’s prodigious kicking made him an obvious contender.

When local commitments prevented him traveling to Melbourne to compete, the paper arranged for a licensed surveyor to measure his kicks at Echuca’s Victoria Park. On 20 September 1928, he booted a drop kick 73 yards (66.7 m) and a punt kick more than 74 yards (68.4 m). He won both sections of the Sporting Globe’s competition, along with the 50 pounds prize money.

Kew Ming continued both his football and his running into the 1930s, placing in many sprint races across regional Victoria. He kept himself extremely fit and when Echuca withdrew from the Bendigo Football League in 1935 he transferred to Echuca East, despite being almost 40 years old. Around the district ‘Kewie’ was known as a placid man who would help anyone in need. He coached a football team in the Young Chinese League and served as a volunteer fire fighter for 25 years. A local newspaper profile described him as “extremely modest, and popular with all who know him.”

When war broke out again in 1939, Kew Ming moved his wife and two daughters to Melbourne and re-enlisted in the army. Deemed too old for active service, he instead became a machine gun instructor. He also became a P.E. trainer because he was concerned that many soldiers weren’t fit enough for combat. Leading by example, he played for Watsonia in the inter-services football competition, where he was two decades older than most of his team mates. After the war, Kew Ming took a keen interest in his daughters’ sporting development, learning the rules of netball so he could coach their team. Drawing on his bootmaking skills, he made running shoes for his daughter Berenice out of kangaroo leather. Berenice developed into a fine sprinter, just like her father. She represented Victoria in 1951 and narrowly missed selection for the Australian women’s relay team that competed at the 1952 Helsinki Olympic Games. Her best time over 440 yards was 58.3 seconds.

Les Kew Ming eased into retirement in East Brunswick, where he enjoyed playing snooker and was a stalwart of the local RSL. He died in February 1960 from a massive stroke whilst driving back to Melbourne after visiting friends in Echuca. It was a premature end to an extraordinary life.

In recent years, historians Rob Hess and Barbara Cooper-Ainsworth have done much to uncover the extent and contribution of Chinese Australians to the development of our national game. As we approach the centenary of the outbreak of World War I, it is fitting that we remember pioneers such as Les Kew Ming who broke down racial barriers both on and off the field.

I was unfamiliar with Kew Ming but the treatment he received does not surprise me. In the United States in the late 70s and early 80s I lived in an apartment across from my airbase with a Korean wife and at first I was surprised at the comments we heard. not as many on base but still a few even now prejudice exists

Excellent reading... He must have lived a fascinating life especially in that climate of racial prejudice in Australian history. Certainly a great Australian.

Persons of Asian descent are becoming an increasing percentage of Australia's population, with higher levels of immigration from Asia. At junior and elite levels, Asians are underrepresented as players(probably less than 2%), although as AFL spectators the figure is higher. I believe the AFL should actively promote Asian participation at the elite AFL level(and participation generally by players below 178 cm)-we used to proudly say" our game is for all shapes and size". The major problem is that at AFL level, average height of players has risen strongly over the last 30 years- up until the 1970's, we had in each team short rovers, pockets, and sometimes wingmen. To increase the popularity of Aust.Football and make it truly representitive of our population, and rebuff incursions by other sports for short players, we probably need to make some rule changes. (Furthermore, the AFL is now heavily promoting football in PNG and South Africa. In PNG. the Melanesian population is short, as is the black population of South Africa)

A rule change that would give a much better chance for short players to become elite AFL players is to require that each team must do a minimum number of torpedoes and dropkicks per game(eg 10 in total ?). We know that football crowds get excited by these types of kicks, which increases the game's popularity, but coaches dont want them as they are more difficult to execute. However, as a generalisation, short players are more ACCURATE kicks-this rule encourages signing short players as they are far more likely to execute these difficult kicks accurately. Cable, Skilton, Price, Stewart speeding stabs! Barrot and Neale drops,Breen torpedoes! 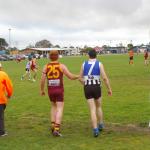