The Herald's Bert Barclay looks at how the foundations of Melbourne's 1939 premiership-winning  team were laid in 1933 by 'Checker' Hughes and Percy Page. 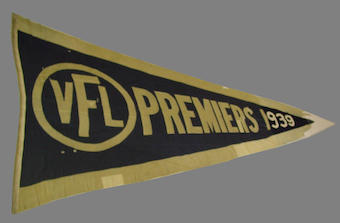 A three-year rebuilding plan that had to be extended to five years, misfired through chance in the sixth season, and eventually succeeded in the seventh year of its operation is the story that lies behind Melbourne's 1939 League football premiership. The plan consisted of weeding out veterans and giving experience to the most promising juniors so that the pennant could be won at one stroke with a team of champions.

The big men behind the reorganisation scheme were Coach "Checker" Hughes, and secretary Percy Page, who transferred to Melbourne in 1933 from Richmond. They brought with them the germ of an idea and, given carte blanche by the Melbourne committee, immediately got to work. Percy Page took the responsibility of bringing to the club new and promising players—a task for which he was eminently fitted, for he had long been known as the League's No. 1 scout. Hughes's job was to shape the players and mould a team that would form the nucleus of a premiership combination. 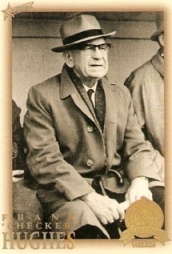 In the first year, Melbourne tried out 11 new men, and of them only Fischer and Les Jones appeared in the grand final on Saturday. Melbourne's place on the list in 1933 was 10th, but at the end of the next season, when 13 new men were obtained, the club finished 6th. Only three of the 1934 recruits—Mueller, La Fontaine, and Gibb—were on this year's training list. Melbourne again finished sixth in 1935, the year in which Gordon Jones, Wartman, Baggott and Smith first played League football. The three-year plan failed, but, because of the big improvement on the premiership list, the scheme was extended to five years. 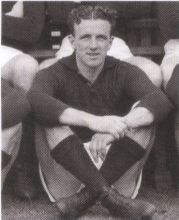 Season 1936 saw further progress, for Melbourne reached the finals and finished third. Roberts, Furniss, Lock and Barassi were four of the eight first season men who were with the club this year. In the following season, with nine new men, Melbourne were second at the end of the home and home round, but a reverse in the finals left them in third position. Emselle (left), Truscott, Murnane and Buckley were the only players of the nine to appear this year.

With the five-year plan completed, Melbourne now had the makings of a premiership team, and they began season 1938 with excellent prospects. It did not take long to reach the leading four, but in mid-season the unexpected happened and Melbourne, following three successive defeats, dropped to sixth. They found it impossible to recover their position, and just missed the finals, a loss by nine points at Victoria Park letting Collingwood in instead of them. 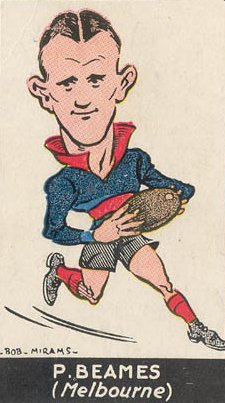 Last year's new men who held their places this season were Hingston, Williams, Harley and Maher. Two other 1938 men did not play this year, for Melbourne had a wealth of talent among their 11 recruits, the best of whom were Ball, Rodda, Anderson, Kimberley and O'Keefe.

When Melbourne opened this season with a 37-point loss to Richmond, it seemed as though they had slipped again, but then followed a succession of seven victories, and it became obvious that the long-awaited premiership was in sight. The side included so many good players that it was ranked with South Melbourne's brilliant 1933 combination, and the only doubt was whether it could keep up its good form. This it did handsomely, and the premiership went to the right club.

In the seven years of the team building process, Melbourne tried out 70 new men, but of them only 33 appeared this year. Only one player, Percy Beames, who joined the club in 1931, is left of those who were with Melbourne before the reorganisation began. Today "Checker" Hughes said that the infusion of a new spirit of determination had played a big part in Melbourne's success. When he joined the club he found that many of the players took part simply to have "a jolly good time."