The one and only... Joe O'Grady

On his 150th birthday, Andrew Gigacz looks back at the career of St Kilda's Joe O'Grady, whose career and life were tragically cut short by illness. 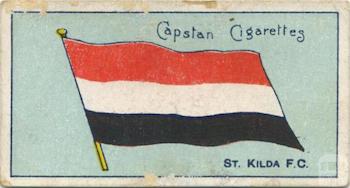 Joe O'Grady will not qualify as a subject of the forthcoming book, The One and Only, written by yours truly and Mic Rees, as that focusses on those footballers who played only a single game of V/AFL footy.

But Joe does qualify as a member of a different 'One and Only' club – he is, somewhat surprisingly, the only player of surname O'Grady to have run out on the field in a V/AFL match played for premiership points.

Today is a good day to remember Joe, even if the records show that he only ever played nine games of VFL footy, all of them losses as part of St Kilda's winless inaugural league season. It's Joe's 150th birthday. He was born Patrick Joseph O'Grady on September 15, 1872. And it won't surprise many to learn that a person named Patrick O'Grady was born in Ireland, in Kilkelly, a small village in County Mayo.

Exactly hen he arrived in Australia is unclear, but by the early 1890s he was playing the Australian national game for a local St Kilda team called Carlisle Imperials (presumably based on or near Carlisle Street). Joe was clearly playing it very well, because by late 1892 he was playing for St Kilda in the VFA, then Victoria's premier football competition.

From 1893 to 1896 the name O'Grady appeared in the Saints' 'best players' list in most weeks. He played variously in defence, in the centre and on the wing, and occasionally up forward. Contemporary newspapers described him as "trusty", "evergreen" and a "crack centreman".

When St Kilda ran out for its first VFL match in the opening round of the 1897 season, the reliable O'Grady was in the side, and playing what was described as a "cool and admirable game" against reigning premiers Collingwood until he eye was cut open in a marking collision.

O'Grady was unavailable for the next month, but played all but two games over the next couple of months before what was to be his last, against Geelong on August 18, 1897.

A VFL career coming to an end after just nine VFL matches (albeit after many more in the VFA years) is not unusual, especially back in 1897, when footy was still very much an amateur game. Some players had to stop playing because of work; others simply weren't good enough. 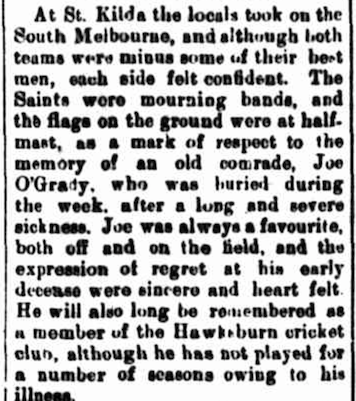 Joe O'Grady's story is a little different, though, and there's a clue to it in his date of death: 28 May 1899. At the age of just 26 – the current age of Christian Petracca and Marcus Bontempelli – Patrick Joseph O'Grady's life was over.

In its report of the South Melbourne vs St Kilda match played on the Saturday prior, the Argus of June 5, 1899 said:

"As St Kilda came out it was seen that the team wore crape (sic). This was out of respect for one of their old players, Joe O'Grady, who died early in the week at the Austin Hospital.  There was not a more gentlemanly or popular player in his day than O'Grady. Two years ago he had to give up the game on account of ill-health, but he followed the team almost till the end, and every Saturday evening one could learn from him a true account of the day's play, and his narrative was always a fair one. Football can ill afford to lose so noble an exponent."

The exact nature of O'Grady's illness is not clear, but the Prahran Telegraph described as "long and severe", so it may have been something like tuberculosis, or 'consumption' as it was commonly known then.

A century and a half later, O'Grady is long forgotten, save for an appearance on australianfootball.com's 'On This Day' page each year on his birthday. But his tale reminds us that there's a story behind every footballer, even those whose career was fleeting.

In this article:
Joe O'Grady