The one and only... Ray Saltmarsh

In the latest in his series looking at one-game players, Andrew Gigacz takes us back to Ray Saltmarsh's only game for Collingwood in 1975. 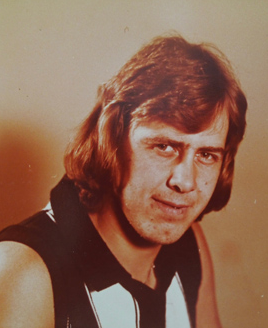 An online search of Melbourne newspapers in the year 1975 using the word 'Saltmarsh' produces only a smattering of results. Among them are a declaration of bankruptcy, a court case that features 'Saltmarsh vs Johnson', and a meal of 'saltmarsh lamb at Mont St. Michel' in France that was enjoyed by The Age's 'Holidays and Travel' writers Hazel and Tony Berry.

Half your lucky, Hazel and Tony!

There is one other Saltmarsh who appears among those entries. A chap by the name of Ray Saltmarsh. In July of that year, Ray was named as Collingwood's 20th man for the Magpies' Round 16 match against Footscray. The two sides were knocking on the door of the top five, both with eight wins, on par three sides inside the top five but with an inferior percentage.

The match, therefore, loomed as a vital one for both sides. For the first half, the match lived up to its billing. In a free-flowing encounter, the Pies and Dogs shared 21 goals, with Footscray taking a six-point lead into the long break. After that break, though, Collingwood took charge. While the Bulldogs added only a single behind, the Pies added five majors to take a 28-point lead into the three-quarter time huddle.

Until that point, Ray Saltmarsh and his fellow 'reservist' John Wise, had watched the battle unfolding from the bench in their dressing gowns. The advent of the interchange bench, which allowed players to come on and off the ground at any time, was still three years away in 1975.

At three-quarter time, though, 22-year-old Saltmarsh was given his chance. Teammate Kevin Grose was labouring with a bruised thigh, and Collingwood coach Murray Weideman told Saltmarsh to lose the dressing gown.

When the siren sounded to start the final quarter, Ray Saltmarsh was out on the Victoria Park turf, alongside legendary Magpie names such as Len Thompson, Ross 'Twiggy' Dunne,. and the Richardson brothers, Max and Wayne. He had trained with them many times of course, but this was his first senior VFL match.

With Collingwood in control of the match and more than 20,000 (mostly Magpie) fans watching on, Saltmarsh might have been forgiven for thinking he would be able to enjoy his debut, with the Pies cruising to victory. But it didn't pan out that way. The Bulldogs, coached by Bob Rose, a Magpie legend himself, stormed home in the final term, kicking five goals.

Footscray might have even got over the line had it not been for the one Collingwood goal kicked in that last quarter. And the man who kicked that goal was none other than Ray Saltmarsh.

Mike Smith's report of the match in The Age does not mention at what stage of the final quarter Saltmarsh kicked that goal. Whether it was early in the term or a match-winner kicked in the dying seconds is unknown. Regardless, given it was the Pies' only goal of the quarter in a match where the final margin was just seven points, it's hard to see it as anything other than an important goal.

A last-quarter goal in a thrilling win in front of 20,000-plus fans at Victoria Park. It's hard to imagine a better start to a VFL career at Collingwood.

And yet, that is also when and where Ray Saltmarsh's VFL career ended. Despite his final-term heroics, he was left out of the side the following week.

Of course there's more to the Ray Saltmarsh footy story than his one and only senior Collingwood game. 1975 was Saltmarsh's second season with the Pies. From 1971 to 1973, he had been a Preston Bullant in the VFA. In his first season there, he played in the infamous Grand Final between the Bullants and Dandenong, kicking four goals in a narrow loss to the Redlegs. Only Dandenong's Jim 'Frosty' Miller kicked more.

In 1976 Saltmarsh returned to Preston, playing another four seasons before he closed out his VFA career at neighbouring Coburg in 1980-82.

Ray Saltmarsh, who recently celebrated his 70th birthday, remains the one and only Saltmarsh to play V/AFL footy, and his one and only VFL match was a win achieved at least in part because of his final quarter goal against Footscray (the team he now barracks for) in July 1975.

The story of Ray Saltmarsh and those of many other one-game players, will be featured in the forthcoming book, The One And Only — Stories of V/AFL players whose first game was their last, by Andrew Gigacz and Mic Rees.