Andrew Gigacz takes a look at the footballers who have played for both Fitzroy/Brisbane and South Melbourne/Sydney. 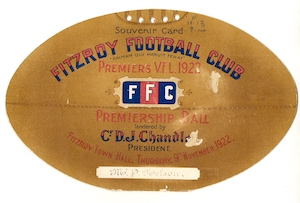 For over eighty years stretching back to the formation of the Fitzroy Football Club in 1883 any playing wanting to move from being a Roy Boy to a South Melbourne Blood/Swan — or vice versa — could do so via a half-hour drive or a couple of tram rides.

Throughout the 1970s, the move became easier still. With Fitzroy having moved its home base to Junction Oval in St Kilda, a short walk around Albert Park lake was all it took to get you from one club to another.

Of course that all change in 1982 when the calls to 'Keep South at South' were ignored and the Swans moved to Sydney. The distance between the clubs' home bases went from 20-minute walk to 12-hour drive. 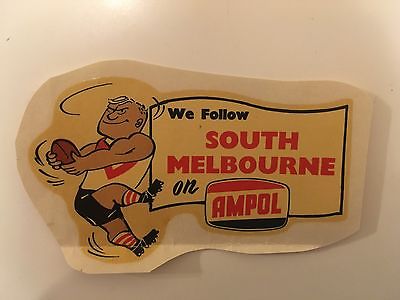 Then, in 1997 Fitzroy 'merged' with the Brisbane Bears, and the newly named Brisbanes Lions' home ground became about an 11-hour trip up the Pacific Highway.

Regardless of their locations, though, the flow of traffic between the two sides has always been strong, with no fewer than 68 footballers turning for the two clubs. And with Sydney coming on board in the AFLW in 2022, that number could grow before the year is out.

Jack Deas became the first of the 68 when he joined Fitzroy in 1899, having played two games for South Melbourne in the inaugural VFL season in 1897. It turned out to be a pretty good move for Jack. He played 15 games for the season, more than any other of his career, and "played the game of his life" as the Roys defeated his old side in the Grand Final to claim the '99 flag.

Deas was followed by another Jack a few years later. Jack McDonough played 21 games for South in 1902-03 and then won premierships with the Maroons in his two seasons at Fitzroy in 1904-05. McDonough's 50th and last game in the VFL was the Roys' 1905 Grand Final win. 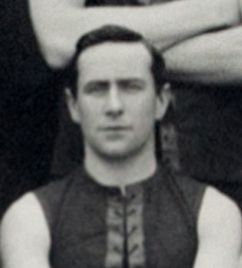 Teddy Buist (right) also won two flags as a Roy after starting his VFL with the Bloods. Buist played 12 games for South in 1906 -07 but was playing for Norwood in the SANFL when the Bloods claimed their first premiership in 1909. He returned to Melbourne in 1911 and joined Fitzroy, becoming a premiership player in 1913 and backing that up in 1916.

Only won of the 30 players to head in the opposite direction has found premiership success after moving. Craig Bolton was a Brisbane Lion in 2001-02 before establishing himself as a star at Sydney. He was part of the Swans drought-breaking flag win in 2005.

In a bizarre twist, four of Maurie Hearn's teammates at South Melbourne in 1933 also moved to Fitzroy. But unlike Hearn, they did play in the Swans' premiership win and, also unlike Hearn, they did not manage to play in a Grand Final win with the Roys. The not-so-lucky movers were Bert Beard, Jock McKenzie, Jim O'Meara and Peter Reville.

Strangely, none of the 38 Bloods/Swans who became Maroons/Gorillas/Lions managed to play 50 or more games for both clubs, but four of the 30 who travelled in the opposite direction did. 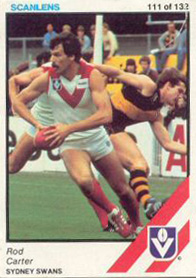 The first of the four 50-50 Swan-cum-Lions was Rod Carter, who played 76 games at Fitzroy and then had a short stint with Port Melbourne in the VFA before adding 210 more games to his VFL tally as a Swan.

In the mid-'80s Glenn Coleman joined Carter in the 50-50 club . He played 64 games as a Lion from 1980-84 and another 61 in Swans colours. Coleman then went on to form his own club — the 50-50-50 club — by playing 69 games for a third team, Footscray. Coleman was the sole member of that club until Leigh Brown gained membership by playing 50+ games for Fremantle, North Melbourne and Collingwood.

Darren Kappler came close to being part of the 50-50-50 club. He followed his 87 games at Fitzroy and 59 at Sydney with 41 at Hawthorn before calling it a day.

Paul Roos is the fourth and (to date) final member of the group, playing 269 games for Fitzroy and 97 more for the Swans.

Maurie Hearn's 'premiership' move came midway through the 1934 season. Hearn was part of the Swans' 29-point loss to Geelong in Round 7, but two weeks later he kicked three for Fitzroy as the Roys beat Hawthorn by 20 points.

Ken Seymour made his VFL debut for Fitzroy in the opening round of 1956. By Round 9, he was playing his fourth and final game for the Lions, a 45-point loss to Collingwood. Four weeks later he was lining up against Collingwood again, this time for South Melbourne. It was another loss, but this time by only six points.

In 1978, John Blair played his 27th and final game for South Melbourne, a loss to Fitzroy. A week later he lined up for Fitzroy, and celebrated by being part of a one-point win over Hawthorn.

Others to have made a mid-season move between the clubs include Russ McInnes and Russ Hodges.

Rowan Warfe might have roared in his 26 games for the Brisbane Lions but his 84 games for Sydney probably made him a Swan for life. And now wonder — LIONS' ROWAN WARFE is an anagram of "ROAR! NOW, LIFE SWAN". 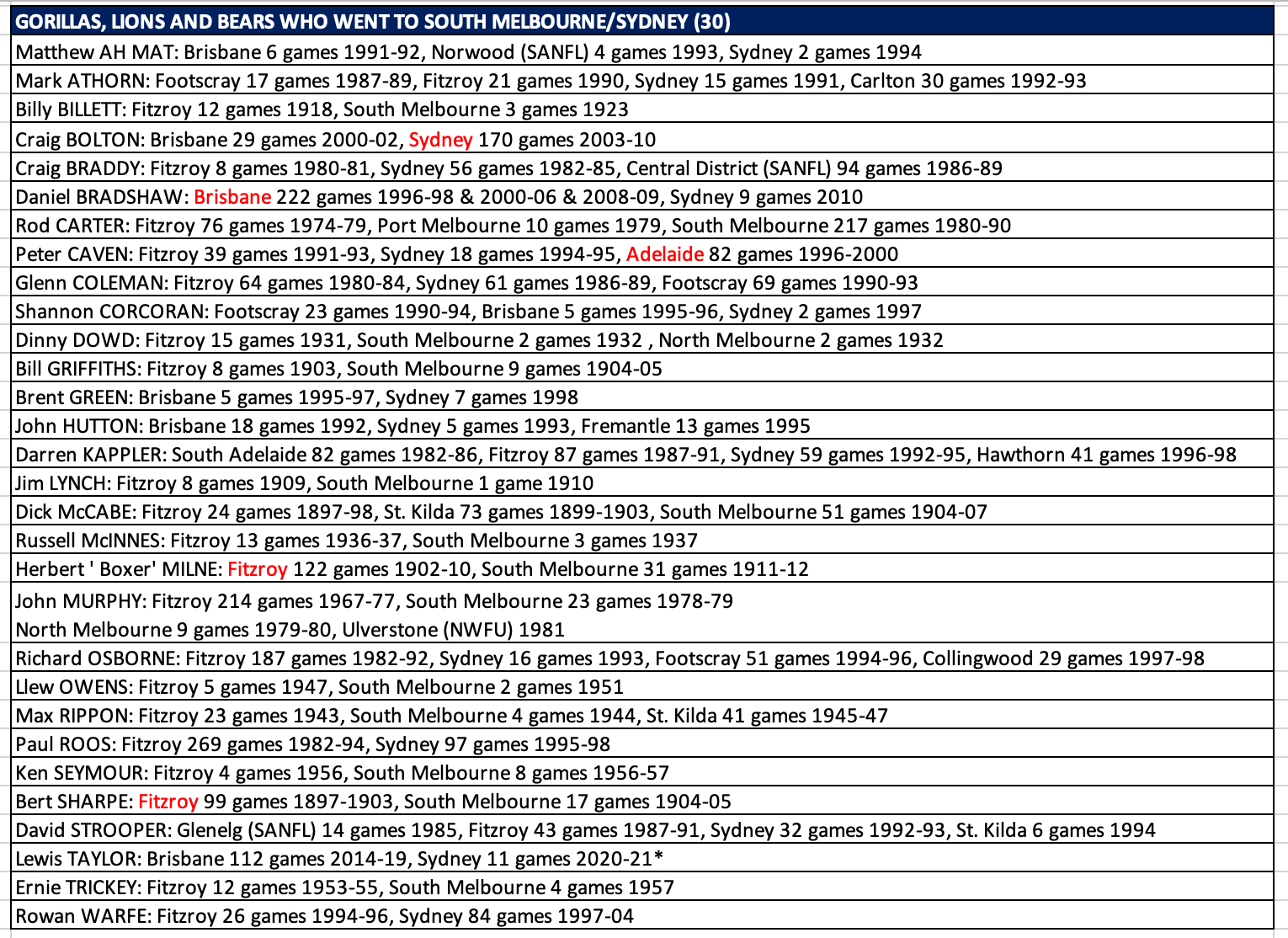 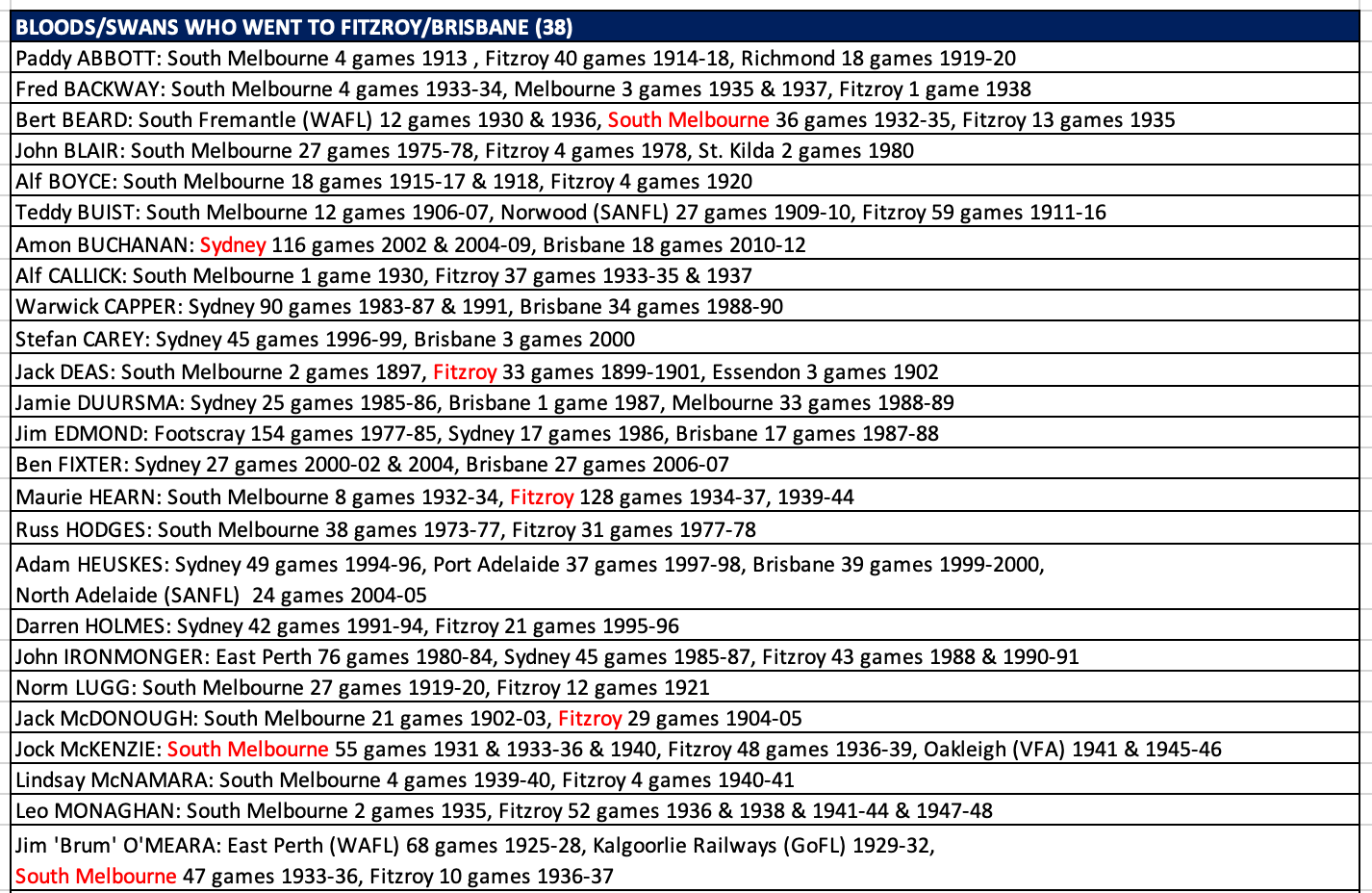