Andrew Gigacz looks at the player traffic that has flowed between North Melbourne and Essendon since the Shinboners joined the VFL in 1925. 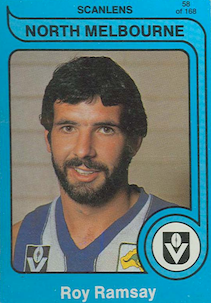 When Essendon thrashed North Melbourne by 86 points in the 1983 VFL Preliminary Final, one of the Kangaroos on the receiving end, Roy Ramsay, must have questioned a decision he'd made a year earlier.

Ramsay had made the move from North Melbourne to Essendon prior to the 1982 season, having played 53 games for the Roos from 1976 to 1981. The Bombers appeared to be on the rise, but Ramsay was unable to establish himself as a regular senior player, despite very strong performances in the 'twos', which saw him when the club's reserves best and fairest award.

With the promise of greater opportunity back at his old club, Ramsay returned to North in 1983, and played every match after missing the opening round. North finished on top of the ladder and found themselves facing the Bombers in the Preliminary Final. While Ramsay might have believed he'd made the right move by going home before that match, he might have felt differently by the end.

The Bombers were in turn thrashed by Hawthorn in the Grand Final the following week, but then won consecutive premierships in 1984-85 while Ramsay continued to ply his trade in blue and white. He was part of the Kangaroos' finals campaign in 1985, but that ended two weeks before Essendon took home the second of those two flags.

On the Beatles self-titled, 'white' album, a controversially included track was one titled 'Revolution #9', a cacophonous eight-minute pastiche of sounds and voices, one of which is the phrase "number nine" repeated on a loop.

It was a song that drove many listeners mad, even hardcore Beatles aficionados. But had he ever heard it, the song may well have haunted Roy Ramsay most of all, because in his first FIVE VFL seasons, he played exactly nine games. He came within a whisker of making that six seasons, playing eight games in 1981 before finally getting a regular run of matches in his second stint at Arden Street. 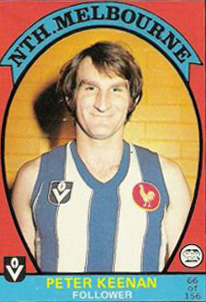 Ramsay is the only one on the list of 51 to move from one of the clubs to the other and back again, but there's one other player on the list who played for a third club before and after his time at North Melbourne and Essendon. That man is Peter 'Crackers' Keenan, who began and ended his career at Melbourne but in the interim played 51 games at North (including the 1977 premiership) and 31 with the Dons.

Keenan's move from Melbourne to North Melbourne yielded a premiership but is switch to Essendon from the Kangaroos did not produce a flag. For two players who went from the Dons to North, though, it was a premiership winning move.

Barry Davis and John Cassin were teammates at Windy Hill in 1971 and 1972 before Davis was recruited by North under the short-lived 10-year rule. Davis was captain of the Roos when they claimed their first ever flag in 1975. Cassin had also left the Dons by that stage, but he was playing with West Torrens in the SANFL. However, he reignited his VFL career with North in 1977, and played in both the drawn and winning Grand Finals of that year.

Davis and Cassin are two of three players on the list to play more than 50 games for both clubs. Davis played 218 games in the red sash and 71 games in blue and white strips. Cassin (whose father Jack was also a Bomber) made 51 appearances for the Dons and 78 for the Kangaroos.

TEDDY SHORTEN made the move to Essendon midway through the 1926 season after five games with North Melbourne. Why he made the move is unclear but his anagram suggests he might have been following advice: "TRY THE DONS, ED". 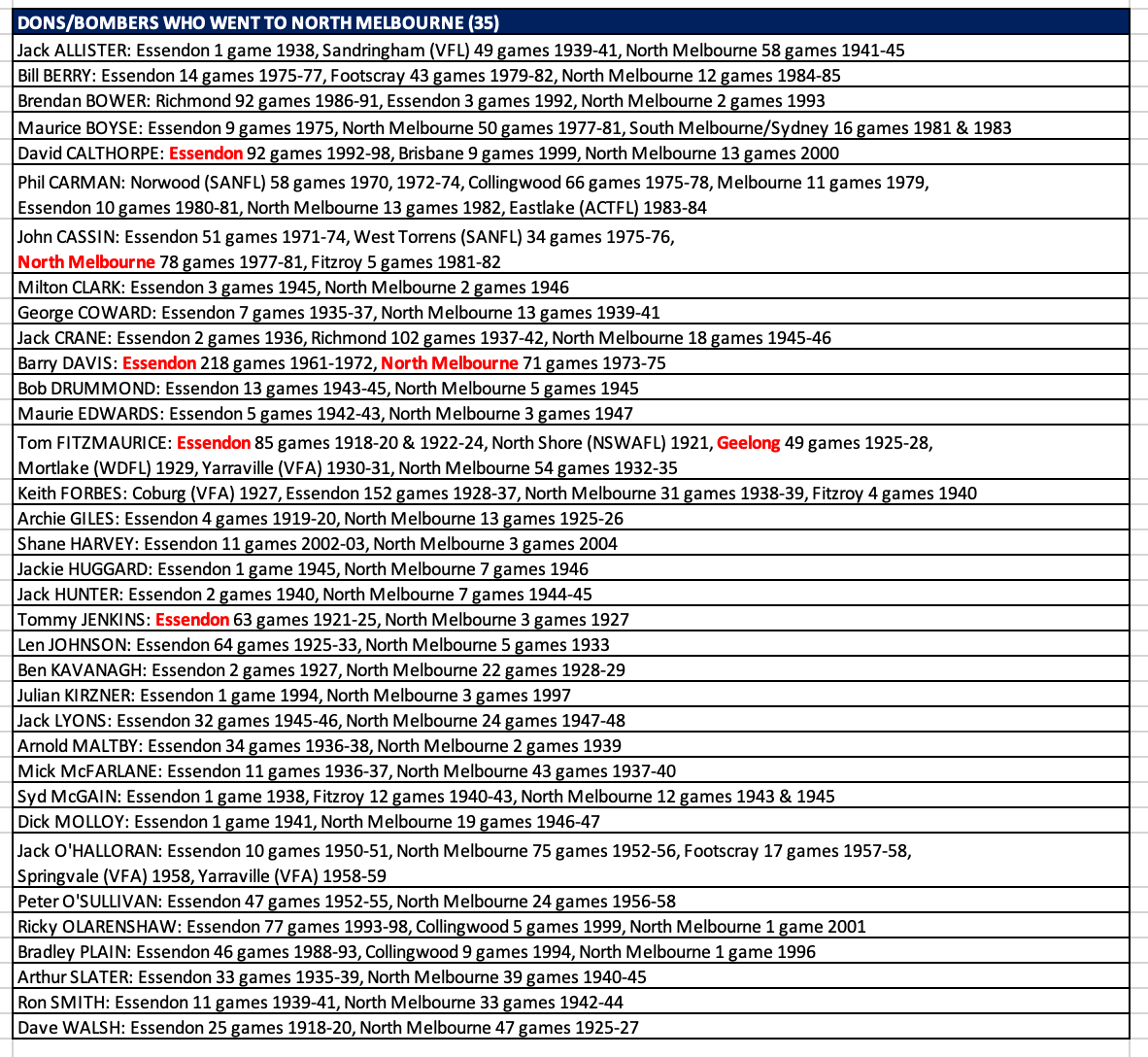