Ahead of Thursday's Richmond vs Port Adelaide match, Andrew Gigacz looks at the 11 footballers who have turned out for both clubs.

Exactly a year after Port Adelaide made its AFL debut in 1997, Chris Naish became the first former Richmond player to run out the colours of the Power. Naish kicked two goals in Port's Round 1, 1998 opening match against Sydney. His double was not enough to get the Power over the line, though.

Two weeks later John Rombotis, who had joined Port for its inaugural season after playing 26 games in Fitzroy's final two seasons, became the first to go the opposite way. Rombotis debuted for his third club, Richmond, in Round 3, 1998, a win over Hawthorn.

Since then a further nine players have turned out in both Richmond and Port Adelaide colours, the most recent being Matthew White, who was a Tiger from 2006 to 2013, playing 105 games, before adding another 48 for Port from 2014 to 2017.

White fell two games short of joining the '50-50 Club' — those footballers who played more than 50 games for two clubs — but three of the 11 Tiger-Crows have achieved that feat. David Rodan was the first to attain the double. He notched up his 50th game for the Power early in the 2009 season, having totalled 65 matches in Richmond colours from 2002 to 2006. 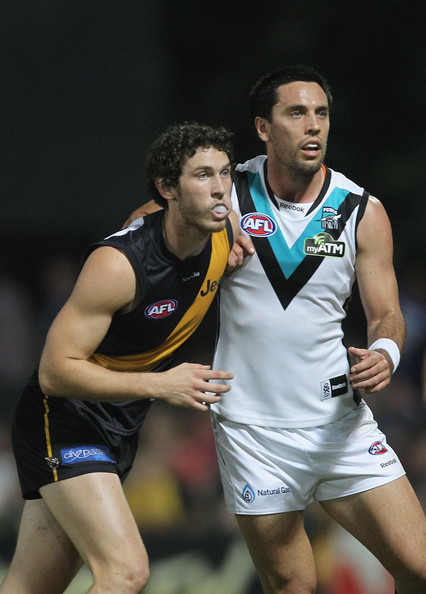 Before he was a Tiger... Troy Chaplin (right)

Sadly none of the 50-50 trio — or indeed any of the 11 dual Power-Tigers — has experienced premiership success, either before or after switching clubs. Troy Chaplin did play one game in 2004, Port's only premiership season so far, but it was long before the finals, and he did not establish himself as a Port regular until 2006.

Chaplin did make it to a Grand Final in 2007, as did David Rodan, although they could both be excused for wishing they hadn't. The Power was thrashed by Geelong in that match by 119 points, the largest losing margin in Grand Final history.

Poor old Chaplin then experienced three consecutive Elimination Final losses with Richmond in 2013, 2014 and 2015, before retiring after the 2016 season. Of course one year later, the Tigers broke their premiership drought.

Andrew Moore was also a Tiger in 2016, having previously spent six years with the Power, but he too was delisted after his only season in Richmond colours, 12 months before the Tigers saluted.

Drafted by Richmond in 2004, Danny Meyer's time with the Tigers was derailed by a hip injury that forced him to sit out the entire 2008 season, after which he was delisted. Port Adelaide gave him a second chance via the rookie draft, but he was only able to add nine further games to his total before pulling the pin in 2011.

Mitch Farmer, who went the other way, also had a year out of senior AFL footy between clubs. In Farmer's case, though, it was simply a matter of not being able to force his way into the Power's senior team in 2009, after he played his first three AFL matches late in the previous season.

Farmer joined Richmond in 2010 as part of the trade that saw Jay Schulz go to Port Adelaide. He managed 28 games in yellow and black before his AFL career ended at the close of the 2011 season.

The fact that he played at two AFL clubs makes Chris Naish a nomad of sorts, but with 143 of his 161 games being played for Richmond, makes he is very much remembered by most as a player in a yellow Richmond sash. And just to back this up even further, NOMAD CHRIS NAISH is an anagram of IN A RICHMOND SASH.

Despite being teammates at Port Adelaide for three seasons and both later playing for Richmond, Matthew Thomas and Adam Thomson only ever played together in four AFL matches, all of them late in the 2006 season.

With that in mind one wonders if the pair actually knew each other well. Would Adam Thomson even give Matt Thomas a nod as they passed each other in the Port Power gym like ships in the night? While not having a definitive answer to this question, their names anagrammatically suggest so. A letter rearrangement of ADAM THOMSON gives M. THOMAS A NOD.