Following last year's Grand Final, Andrew Gigacz looks at the footballers who have played for both of the competing clubs during the V/AFL era. 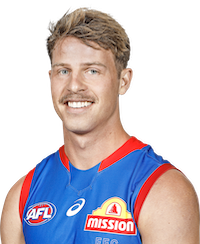 The morning of this year's Grand Final between Melbourne and the Western Bulldogs was tinged with sadness with the news that Greg Parke, a former player with both clubs, passed away on the very day of the match. Parke played 119 games for the Demons between 1968 and 1973 before moving to Footscray, for whom he played 37 matches in 1974 and 1975. He rounded out his career with a season at Norwood in the SANFL in 1976 and another at Fitzroy in 1977.

Parke is one of 39 footballers — male and female — who have worn the colours of both clubs. Three of those were involved in this year's Grand Final. Mitch Hannan (right) and Stef Martin lined up for the Dogs against their old side, while Bulldogs' coach Luke Beveridge is himself a former Demon and Dog player.

The trip from the MCG to Whitten Oval in Footscray is under 10 kilometres but historically, from a culturally stereotypica perspective at least, the clubs that call those venues home — Melbourne and the Western Bulldogs — are a world apart.

But that hasn't stopped any 'cross-pollination' between the Demons and Dogs. Since the Bulldogs joined the VFL in 1925 a total of 35 men and four women have crossed from one of those clubs to the other. 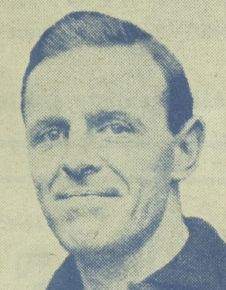 The first two to make the move were Bill McIntyre (left) and George Garlick Snr, both of whom made the move to the Bulldogs prior to Footscray joining the VFL.

McIntyre played three games for Melbourne in 1920 but joined the Dogs in the VFA in 1921. He was still with the club in their inaugural VFL season, 1925, in which he played 13 games. Garlick's story is slightly different. He played five games for Melbourne, also in 1920, but then went to Bendigo East before joining the Bulldogs in 1924. He played two games for the Tricolours in 1925.

Since then 37 others have made the move with varying degrees of success. The newest of those is Mitch Hannan, who joined the Bulldogs in 2021 after playing exactly 50 games for Melbourne. Although Hannan only made his senior debut for the Dogs this year, his arrival at Whitten Oval was a homecoming of sorts, as he played for the Dogs' VFL team in 2015 and 2016, and was part of Footscray's premiership win — ironically over Melbourne's VFL side Casey — in the latter of those seasons.

Two out of three ain't bad

Although Mitch is one of three Hannans to play footy at V/AFL level, he is not the first to have been both a Demon and a Dog. That honour belongs to Peter Hannan. Unlike Mitch, Peter took his sweet time in becoming a two-club footballer. After playing two games for Melbourne in 1927, Peter Hannan did not play senior VFL footy again until 1933, during which he made six appearances for the Dogs. 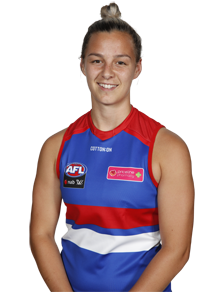 None of the men have yet found premiership success after moving clubs, but the AFLW's Deanna Berry (right) has. Berry played all seven games for Melbourne in the inaugural AFL Women's season before crossing to Whitten Oval, and she was part of the Dogs' Grand Final win the following year.

Two players have moved from the Dogs to the Demons after winning a flag. Berry's premiership teammate Libby Birch is now a Melbourne player, while John Kerr, widely considered to have been the best player on the ground in Footscray's 1954 premiership win, made a mid-season move to Melbourne in 1958, although he played just one game in the red and blue.

While he did not win a premiership as a player, current Bulldogs' coach Luke Beveridge, who played with the Demons, Footscray and St Kilda, became the Dogs' second-ever premiership-winning coach in 2016.

Although none of the men found flag success after switching clubs, one of them did win a Brownlow Medal. Braybrook boy Brian Wilson played nine games at Footscray in 1978-79 but moved to North Melbourne after failing to establish himself in the Bulldogs' side. He certainly did that at North, playing 39 games in two years before surprisingly being cleared to Melbourne, where promptly claimed the 1982 Brownlow. He went on to play 154 games for the Demons, before ending his AFL career at a fourth club, St Kilda, for whom he played nine games in 1991. 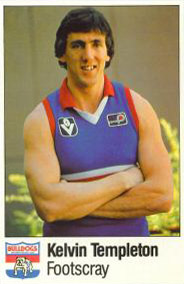 Not as well known as his older brother Ricky, who played 151 games for Collingwood from 1977 to 1986, Jamie Barham had a short stint in the VFL, playing four games for Melbourne in 1981 and one for Footscray the following year.

The younger Barham holds an unfortunate record, being part of a wooden spoon team in consecutive years at two different clubs. A third brother, Billy Barham, played 12 games for Melbourne in 1974-75.

The last shall be first

Charlie Pagnoccolo's first game is a memorable one for many people, especially Dogs' fans. But Charlie is not the reason for that, even though he was more than serviceable on debut, picking up 15 touches. It just so happens that Pagnoccolo's first game — in Round 5, 1970 — was the last of a bloke called Ted Whitten. EJ's final match has been immortalised on film, with footage of his passionate three-quarter time speech to his players often getting a run in the media.

Ted's oration inspired the Bulldogs to hold on for a two-point win in the Western Oval wet over Hawthorn. Charlie, meanwhile, went on to play every other game in 1970, including a starring performance against Geelong in which he collected 31 touched and kicked three goals. 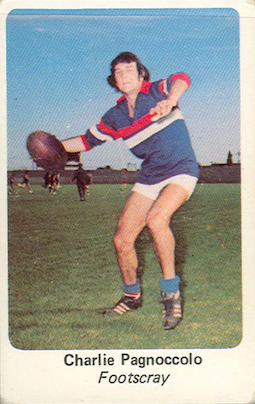 Pagnoccolo ultimately played 46 games for the Dogs before making an off-season move to Melbourne in the summer of 1973-74. In the end though, he made only one appearance for the Dees, a 17-possession game in a Round 8 loss to Hawthorn in 1974. So Charlie's career, which began with an inspiring win against the Hawks, ended with an uninspiring loss to the Hawks.

Mitch Hannan is the latest footballer to join the Dogs/Demons list but he was preceded by another newcomer by only a few weeks. The Bulldogs were looking for a fit, stern ruckman to help out the developing Tim English at the centre bounces, and they found STEFAN MARTIN, who not only fits the bill on the field, but also grammatically. He is indeed A STERN FIT MAN.

Extensive research has failed to uncover what happened to ERIC ANDERSEN, who played two games for Melbourne in 1926 and 22 games for Footscray in 1929-30, after he played his last game for the Dogs in 1930. Perhaps the reason his post-Footscray playing days remain a mystery is the fact that he is an anagram of CAREER ENDS IN...?

Without knowing the dress code preferences of JESS ANDERSON, who played with the Demons and Dogs in 2017 and 2018, her name might be a clue. It's an anagram of DRESS: NO JEANS!

DEANNA BERRY has only played 23 AFLW games so far, seven for Melbourne and 16 from the Dogs, but time flies quickly and before we know it, her milestone 50th game will be upon us, by which time the cheer squad will hopefully a BANNER READY.

KELVIN TEMPLETON is rightly lauded for his star performances on the field, but it's a little-known* fact that he was recognised by his peers at Whitten Oval for going the extra step when it came to keeping the rest rooms at the Kennel spotlessly clean. In honour of that he deserves to be retrospectively awarded the KENNEL TOILET MVP.

*Little-known mainly because it is probably untrue! 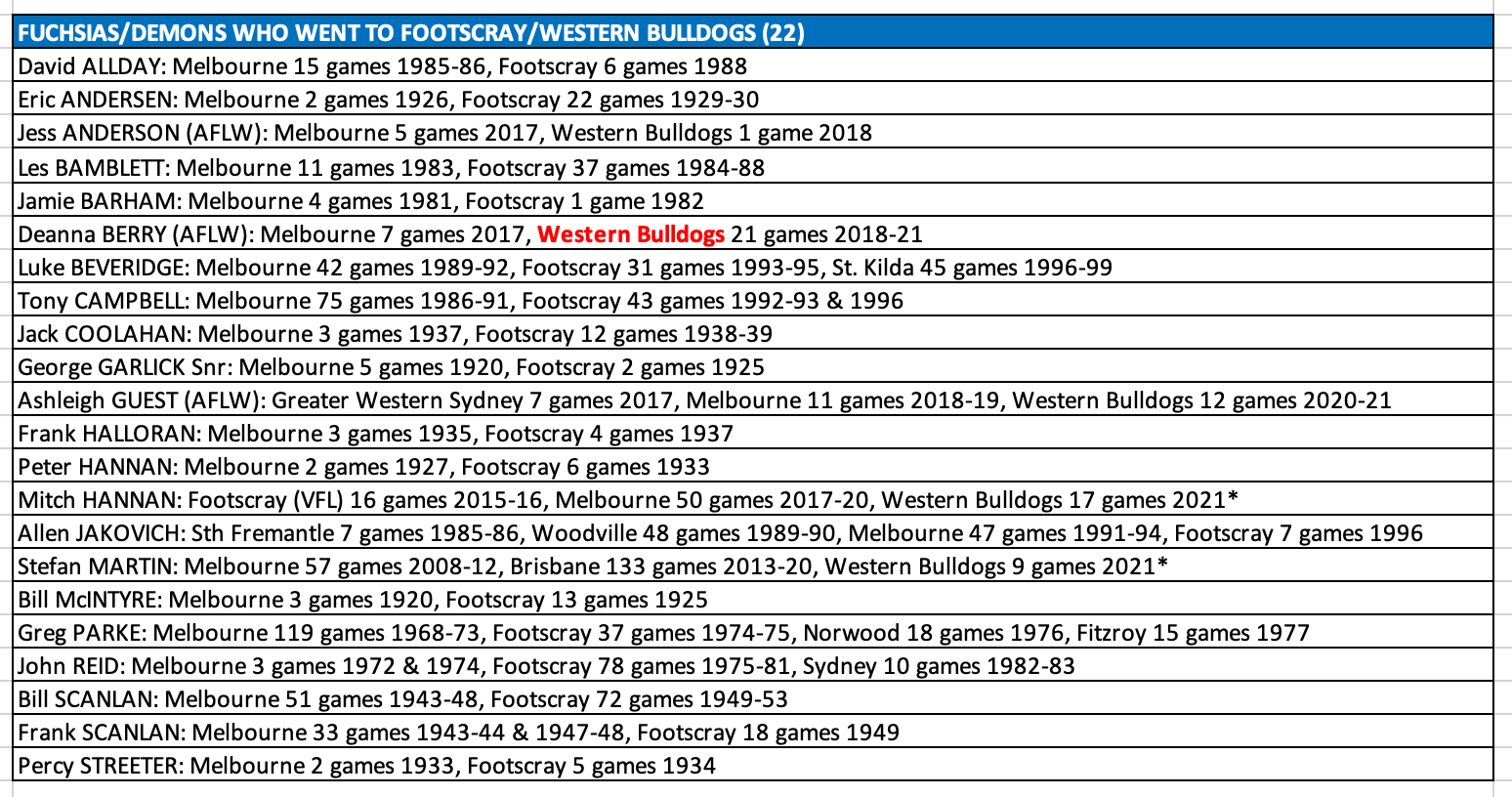 An earlier version of this article first appeared on Andrew Gigacz's Patreon blog page. The original can be found here.

I can't believe that you didn't write anything about my favourite player of all time Lally Bamblett and his 50+ goal season In 1985! Quality VFL defenders would lose their minds and fall over or hand the ball over if they sensed that Les was on the plot.