When the honeymoon is over

History correctly predicted Melbourne would begin their 2021 premiership defence with a win but does it suggest the Demons can go back-to-back in 2022? Andrew Gigacz investigates. 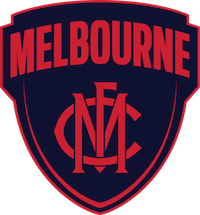 Having broken a substantial premiership drought last year, Melbourne came out all guns blazing in the opening round of the 2022 AFL season last week, giving up a lead of 21 points to defeat their Grand Final opponents, the Western Bulldogs by 26 points.

History reveals that the vast majority of sides that have broken a premiership drought kick off the following season with another win. This is probably not a great surprise. After all, these teams have just won a flag, so you would expect them to still be pretty good six months later.

But what about the 'premiership hangover'? Well, there might be something in that concept, but it does not generally reveal itself at the beginning of the following year. In many cases the premiers will be unfurling their premiership flag in Round 1, so there will be plenty of fans there to witness the unfurling and inspire the players to another win. That seemed to be the case for the Demons in their first-round win over the Dogs last week.

A premiership drought of 20 years or more has been broken 16 times in V/AFL history, including by Melbourne in 2021. Thirteen of those 16, including the last five, continued the celebration with a first-up win the following year. The only exceptions (marked in blue below) have been Sydney, who lost by a solitary point to West Coast, the team they'd vanquished to win the 2005 flag, in Round 1 2006, North Melbourne in 1976, and Hawthorn in 1962.

So, is the 'premiership hangover' a myth? Or a tangible factor that can contribute to a side's demise after having won a flag? Well as strong as the historical evidence is for it being a myth in terms of winning in the opening round the following year, the evidence that it is not a myth — in terms of going 'back-to-back' — is stronger still.

In 2017 the Western Bulldogs' coach, Luke Beveridge, and their players spent a fair bit of time trying to convince the public that the downturn that followed their drought-breaking 2016 premiership win was not a 'hangover'. Not everyone was convinced. In fairness to the Dogs, it's a concept that extremely difficult to quantify. The Bulldogs had their fair share of injuries in 2017, particularly in defence, and they were certainly a contributing factor to the club's below-expectation season. On the other hand, the Dogs were also decimated by injury in 2016, and they won the premiership!

For Richmond, who broke a 37-year drought a year after the Dogs, the season panned out differently, but it ended the same way — without a flag. Unlike the Bulldogs, the Tigers powered their way through the 2018 home and away season, their 18-4 record giving them a top of the table finish. But they fell at the penultimate hurdle, suffering a shock loss to Collingwood in the preliminary final.

Quantifiable or not, history is littered with teams who have failed to 'back up' after winning a flag — Richmond in 2018, the Dogs in 2017, and Hawthorn in 2008 recent obvious examples — interspersed with those who have turned their premiership destiny into a premiership dynasty, Brisbane (2001-03) and Hawthorn (2013-15) the two cases this century.

While the hangover factor is hard to measure, no such difficultly exists in simply plotting the path of a team, in terms of wins and losses and ladder finish the following season, after it has won a premiership. Success breeds success, so the saying goes, but is that true of teams for whom success has arrived after years, indeed decades, without triumph?

History suggests not. A deeper looked at the 15 teams before Melbourne last year to have broken a drought of two decades or longer shows that not one has been able to follow up their premiership success and go back-to-back.

Four of the 15 have made it back to the following year's Grand Final, but all have lost. Of those four, Sydney came closest to go going back-to-back, falling a solitary point short of the West Coast Eagles — the team they vanquished in 2005 — in the 2006 decider. Since then, Geelong and Collingwood have both followed up drought-breaking flags with near perfect seasons, only to fall on Grand Final day.

The fourth case of a side losing a Grand Final after breaking a drought the year before was in fact the first, chronologically, with North Melbourne succumbing to Hawthorn in 1976 after they had beaten the Hawks in 1975 to win their first VFL flag in their 51st league season.

Interestingly, two of the four to make it all the way back to a Grand Final the following year did so after having lost in the opening round.

One of the things that stands out in looking at the list of drought-breakers trying the defend the flag is that many of them have failed to even make finals the following season. This has been less of a trend recently, with the Western Bulldogs the only side failing to make it back to finals action since Collingwood did the same in 1991, but all seven premiership drought-breakers between 1926 and 1967 missed the finals the following season. 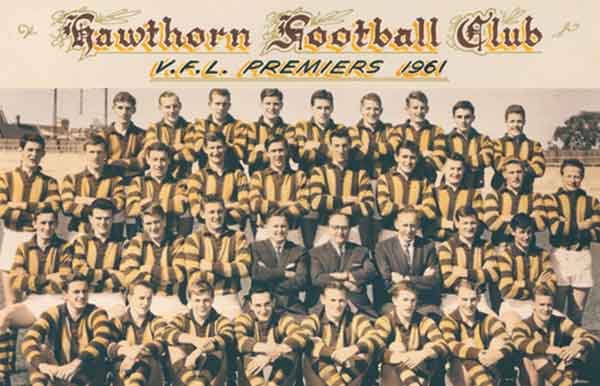 The team that had the biggest fall from grace was Hawthorn in 1962. After breaking through for a flag in their 37th season in 1961, the Hawks fell away badly the following year. They went down to the side they had defeated to win the premiership — Footscray — in round one, and never really got going after that, winning just five matches to finish ninth of 12 teams and an incredible eight games out of the top four.

While the Bulldogs in 2017 slipped to ninth as Hawthorn had in 1962, their slip was not as dramatic in relative terms, as they were theoretically still capable of making the top eight heading into the last round and ultimately finished only a game out of the finals. Theirs is one of many cases of drought-breaking sides falling narrowly short of finals action the following year.

In fact the Dogs themselves had the narrowest of all misses as Footscray in 1955, after they had broken through for their first VFL flag in the previous season. Having won 12 of 18 matches, more than the 11.5 wins of their 1954 premiership year, the Bulldogs missed the top four by just 0.6%. An extra goal, along with one more behind, would have seen them return to finals to defend their premiership.

The Bulldogs are the only drought-breakers to miss by percentage, but two others — Richmond in 1968 and Collingwood in 1991 — fell half a game short of the finals a season after breaking droughts of 24 and 32 years respectively. Earlier in that 1991 season, Collngwood's 'hangover' appeared to last a single hour. The Magpies fell five goals behind Footscray in the second term of the opening round after they had finally won a premiership in 1990, but then blew the Dogs away in the second half to win by 70 points. Theirs looked like being shortest premiership hangover in history, but the Pies stuttered there way through the season before eventually missing out on September action.

The years after the year after 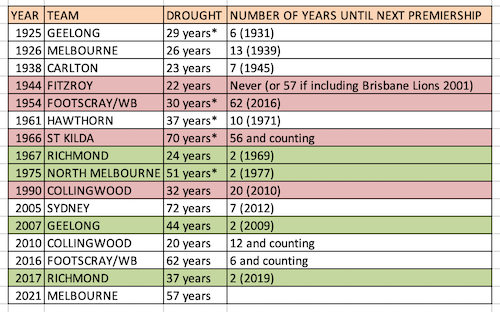 What has been the fate of the 15 sides who couldn't follow up after the drought? Well, several (marked in green at right) have bounced back the year after. Richmond, who rebounded to win the 2019 flag after falling short in 2018, did exactly the same in 1969 having won in 1967. Similarly North Melbourne in 1977 and Geelong in 2009 won premierships after a one-year 'fall from grace'.

However, history suggests that if you don't bounce back within two seasons, you'll be waiting a fair while before tasting premiership success again. Of those clubs that did not make it 'two in three' none has won another flag inside six years. Geelong in 1931 had the shortest wait — six years — and the Bulldogs have the chance to match that this year. Carlton (1938) and Sydney (2005) took seven years to win another flag, and all other drought-breakers have gone into double figures. For four sides (marked in pink, above right) their Grand Final win signalled the start of another 20-plus-year premiership drought.

So what of the Demons? Can they follow up their drought-breaking premiership with another in 2022? The team's age profile suggests they're ripe for a period of several years of dominance. Richmond's suggested the same after the Tigers' 2017 win and it ultimately proved to be so, with premiership wins in 2019 and 2020. But they were unable to go back-to-back immediately after breaking the drought.

If Melbourne can go back-to-back, they will be indeed breaking the V/AFL mould. But we'll have until at least the end of August to see if the Demons are mould-breakers as well as drought-breakers.

In this article:
Melbourne