Hot Dogs or hot Pies? Both!

With Adam Treloar debuting in red, white and blue last Friday, Andrew Gigacz looks at the 38 players who have worn Magpies and Bulldogs colours in the V/AFL era. 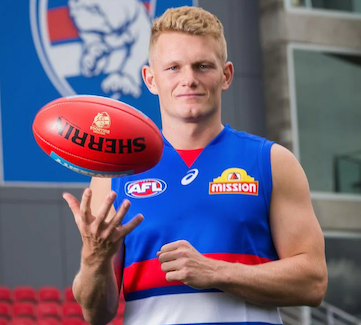 When the 2020 AFL season ended, the Western Bulldogs would have had no thought of recruiting Adam Treloar, who seemed firmly ensconced at Collingwood with five years of his contract left to run. But all was not well at Magpie Land, and Treloar found himself unwanted by the team he loved. The Bulldogs swooped, and Treloar ran out in red, white and blue last Friday — against the very side that dumped him.

In making his debut for the Dogs, Treloar has become the 38th V/AFL/W player to have pulled on the guernsey for both clubs. The first was Con McCarthy, who was a member of the Footscray side that played the club's first VFL match against Fitzroy in the opening round of the 1925 season.

By that time, McCarthy was a veteran, and a player who appeared in Grand Finals and premierships almost as a habit. In McCarthy's first VFL season in 1915, the Magpies made the Grand Final but McCarthy did not play. But he made up for that soon after, playing in all of Collingwood's Grand Finals from 1917 to 1920, winning flags in 1917 and 1919.

McCarthy switched to Footscray in 1922, when the Dogs were still a VFA side. McCarthy played in three more Grand Finals over the next three years, a narrow loss to Port Melbourne in the 1922 decider, and wins over Port and Williamstown in the following two seasons.

McCarthy is one of four Pies/Dogs to have won a premiership and then made a move between the clubs. The others are Horrie Edmonds, a Collingwood premiership player in 1929 and 1930, Travis Cloke (2010) and current Magpie Jordan Roughead who won a flag with the Dogs in 2016.

Two of the players on the list have won flags after changing clubs. The first of those was Bill Aldag, who played two games for Footscray in 1928 before turning up at Victoria Park in 1930, Aldag played his first match in black and white in Round 17. He played again the following week but was dropped for the Semi-Final before being recalled for the Grand Final, a premiership win over Geelong. It was just his third game as a Magpie, and the fifth of his VFL career. 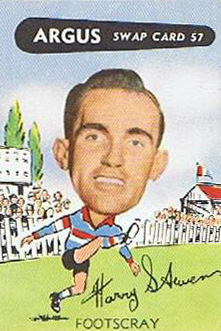 Two decades later, Harvey Stevens, who had played in Collingwood's 1952 Grand Final loss to Geelong, was let go by the Magpies, supposedly because he was overweight. Stevens had had a rib injury which had prevented him from training, so this decision to give him his marching orders may have been unfair.

Collingwood's loss was Footscray's gain in 1953, although Stevens might have felt that he'd missed out when Collingwood won the 1953 flag. But a year later, he would have felt it was all worthwhile when he kicked a goal in the Bulldogs' 1954 Grand Final win over Melbourne.

Aldag did not play a senior game in 1930, the year after his two games with Footscray, and the year before his first senior game at Collingwood. He is one of five Bulldog-Magpies to have a 'gap year' between clubs.

Baker returned to Collingwood in the middle of the 1932 season, where he played another handful of games. He played no senior VFL footy in 1933, but made three appearances for Footscray at the start of the 1933 season, before his league journey came to an end.

Ted Baker wasn't the only player to take a circuitous route between these two clubs. Horrie Edmonds, after playing in two premierships with Collingwood, also won a flag a Richmond in 1934 before playing one game for the Dogs in 1937.

Meanwhile, Ted Carroll played a single game with Footscray in 1973, followed by 31 at Melbourne in 1974-78, before finishing his career with three games at Hawthorn. Ben Hudson's career took in Adelaide first, and then the Western Bulldogs before he announced his retirement after 2011. That retirement did not last long. He saddled up for Brisbane in 2012, before heading back to Victoria, where he rounded out his career with seven games for Collingwood.

In a career that took in 17 seasons and four clubs (including the Pies and Dogs), RICHARD OSBORNE played a game of footy that combined the brute force of a large African animal with poetic moves of which Shakespeare would have been proud. It's rather appropriate, then, that he is an anagram of BARD RHINOCEROS.

Meanwhile, the newest addition to the Pies/Dogs list, ADAM TRELOAR, has the ability to evade tackles like a bullfighter escapes a charging beast. He's just like a REAL MATADOR.