In an extract from his new book, "Miracle Match", Ken Piesse looks back at Fitzroy's against-all-odds win over Geelong in 1963.

Friday night, July 5, 1963. It was 6 pm and already pitch black. The temperature had tumbled into single digits and a scotch mist illuminated the lights of the City. Wally Clark had called all the Fitzroy players to the Brunswick St. Oval for a Council of War. The bottom-of-the-ladder Lions, without a win all year, were opposing glamor team Geelong, a prime premiership fancy. With favorite son Kevin Murray away on state duty, Clark was coaching the firsts for the first time. He’d seen all the newspapers. Norm Smith in Truth, Alf Brown in the Herald and Ian McDonald in the Globe all agreed. It was a Mission Impossible, especially as Graham ‘Polly’ Farmer – the biggest name in the game – was playing club rather than state football. Who could possibly stop him?

Farmer’s combination work with his rover Billy Goggin was uncanny. His habit of taking the ball out of the ruck contest and instantly handballing 15 and 20 yards to little Billy standing off the pack was one of Geelong’s great attacking cornerstones, Goggin’s daisycutting passes invariably finding Doug Wade or the exciting teenage find from Tooleybuc, John Sharrock. As a pair, Farmer and Goggin were just about unstoppable. The Cats had A-raters on every line. Fitzroy were plodders; totally out of their depth. It shaped as a classic mismatch. No one had picked the Roys.

And much to the club committee’s disgust, not one of Melbourne’s radio stations, even the racing ones, were bothering to send a commentator.

As they trudged into the cricket club rooms for their meeting, avoiding the puddles after heavy rain earlier in the week, Camperdown recruit Brian Carroll approached Clark. His brother-in-law Geoff Daffy, a racehorse trainer, had tagged along. Could he come in and listen? ‘Sure,’ said Clark.

For 40 minutes Clark spoke earnestly and purposefully, outlining what he expected. He raised his voice only when reinforcing how everyone considered Fitzroy the rank outsiders; a 100/1 chance. ‘But fellas,’ he said, ‘the ground’s a bog. Geelong may have the skill, but we have the desire. And if we jump them early, who knows what can happen.’

He paused and went through the basics, the non-negotiables. It had to be four quarters. No shirkers. No retreat. Plenty of guts and determination.

Stick to the team rules. No kicking across goal. Attack down the grandstand side, defend to the boggier woodyard side. ‘And fellas,’ said Clark, pausing and running his eye back and forth over the whole group, ‘everyone has to run and run and run – just like we did out here on Saturday. Tomorrow we’re going to use lots of handball. They won’t be expecting it. Flankers: at all times you must be positioned inside your opponents. Push ‘em to the boundary. Don’t give ‘em any room.’ He reinforced the importance of every position and how one weak link could be fatal. To full-back Allen Lynch, one of Fitzroy’s best all year, he emphasised how dangerous ‘young Sharrock’ was. ‘He’s a left footer Al, so always attack his right side, no matter what. He’ll always turn back into you.’

You could have heard a pin drop. Few were more admired or respected than the crew-cutted, roly-poly brick salesman. Having played 100 games, he’d continued to serve the club as playing-coach of the seconds.

He was both mentor and mate to dozens from the March champions on.

Working his way through the lines, Clark came to the rucks and paused.

‘Bryan’, he said, addressing country boy Bryan Clements, not yet 21. ‘You can win it for us.’

‘You have the biggest job of all. Polly Farmer. If we can negate him or just break even with him, we’re in this game.’ He talked of the West Australian champion’s expertise in using the angles and his thighs, jumping into his opponents and nudging them away before taking the ball with his right hand, quickly transferring it to his left and shooting off destructive handballs to the will-o-the-wisp Goggin, invariably standing on his own. ‘You have to block off Farmer’s right hand side Bryan,’ he said. ‘Don’t allow him any room to move, to free his arms. Use your leap. Don’t let him body you. Come in late at him. And always from the right side. Compete. Nullify. Frustrate… Ronny (Fry) will be around to help too.’

Eyeing John Hayes, selected as first rover for the first time, he told him how he also had a key role to dim the brilliance of Goggin. ‘We can’t allow him his run Johnny. It puts too much pressure on the boys down back.

Clark wished them all good luck and a good night’s sleep. ‘See yer all tomorrow,’ he said.

Carroll was walking out with Daffy when his brother-in-law stopped him and said: ‘You know Brian… if you all do what Wally Clark says, you’ll beat Geelong tomorrow…’

This is an extract from Ken Piesse's forthcoming book, Miracle Match, the day David downed Goliath, Brunswick Street Oval, July 6, 1963, the story of one of League football’s great boilovers as remembered by the participants themselves.

Published in a limited edition of 563, including 63 hardbacks signed and numbered by Fitzroy’s greatest playing son Kevin Murray MBE, Miracle Match costs $65 for the signed edition and $35 for the standard. Postage included. It is available from the author Ken Piesse at kenpiesse@ozemail.com.au or phone Ken on 0419 549 458. It’s strange the people said the same thing about East Perth in the 1961 WAFL Grand Final, when Swan Districts did the same thing to Farmer in his last game for the Royals, which no-one thought Swans had any chance in. Or, going back seven years, it’s interesting to recall Farmer’s fallibility in much worse conditions in what was called “The Swim Though Perth” by the Sunday Times (see at ‘http://www.bom.gov.au/jsp/ncc/cdio/weatherData/av?p_display_type=dailyDataFile&p_nccObsCode=136&p_stn_num=009034&p_c=-16472394&p_startYear=1956’ for how much rain fell) and East Perth scored what is – even counting pre-1919 football – the lowest score by an eventual premier club in any major Australian Rules league. 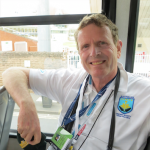