The ghosts of Richmond past

One of the few VFL footballers who played for both his VFL and Country League team at the same time, Frank Huggard's fiery play denied him two Richmond flags.
read more 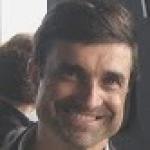 I work in Libraries and have been an IT Manager for the last 13 years. I didn't inherit any top footballing traits from my grandfather (Frank Huggard VFL player in 1920s) but my father and uncles all played football at a good level. My dad's cousin Jackie Huggard played VFL football for North Melbourne and Essendon. His father was Jack Huggard who played 27 games for Richmond, and was the brother of Frank. I played tennis a lot as a teenager and now watch way too much sport for someone who works in libraries and in the area of information and research data management. I used to work at the State Library of Victoria and was part of the project to digitise the VFL Record. See http://digital.slv.vic.gov.au/R/?func=collections&collection_id=1081

1987 VFL Preliminary Final when Jimmy Stynes ran over the mark of Gary Buckenara. Leo Barry's mark at the end of the 2005 AFL grand final to win Swans first premiership in 72 years (I saw that mark from about 10m away). 2010 drawn AFL grand final. 1977 drawn VFL grand final. Peter Hudson's attempt to break the 150 goals record in a VFL season in 1971.