Fitzroy Pete, aka Peter Carter has released a book that will warm the cockles of all Lions' fans, young and old.
read more

Peter Carter remembers Phil Matson,who had success wherever he played, and took East Perth to seven premiership between 1919 and 1927.
read more 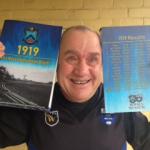 A diehard Fitzroy supporter, I've never forgiven the AFL for its "clinical execution" of the RoyBoys. Thankfully, I have WAFL club East Perth, for whom I'm privileged to be the voluntary club historian, to maintain my passion in footy. I'm equally as fanatical about cricket and hope that Australia can hang on to the Ashes this English summer. My favourite all-time players are Allan Border, Rodney Hogg and Ian Redpath.

East Perth's thrilling 1978 premiership win, by two points over Perth. The Royals had to win their last seven home-and-away games to qualify for the finals. Fitzroy's 25-goal thrashing of top-of-the-ladder North Melbourne in Round 13, 1983, and the epic one-point elimination-final victory over Essendon in 1986.