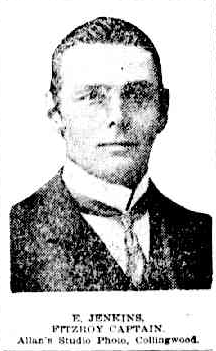 Renowned as one of the finest defenders cum followers in Victoria during this career, Ernie Jenkins was a stalwart both of strong Fitzroy sides and VFL representative combinations for much of the first decade of the fledgling league's existence. Quick over the ground, strong in the air, and supremely courageous, he had all the attributes necessary to succeed in what, at the time, was arguably the toughest position on the field. He played 182 games in 13 seasons with the Maroons, and was one of the best players afield in the winning Grand Finals of 1899 and 1905, as well as the losing affair of 1906 against Carlton.

He was club captain in 1906 and 1907, and three years after his retirement as a player, in 1913, he returned to the VFL as non-playing coach of Richmond, leading the comparative league novices to seventh place on the ladder in a ten-team competition.

After ending his playing/coaching career ended, Jenkins remained involvement in football by becoming a goal umpire. In that role he was one of the outstanding umpires of the 1920s, officiating in 133 matches between 1920 and his death in 1927, including 16 finals and five Grand Finals.