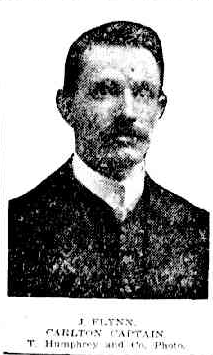 Jim Flynn was a powerful and vigorous ruckman who nevertheless combined brain with brawn. His leadership potential was soon recognised at Carlton, where he moved in 1903 after six seasons and 72 games with Geelong, and in 1905 he was made club captain.

After leading the Blues to a 1906 Grand Final victory over Fitzroy, Flynn was forced to retire owing to business commitments. However, when his successor as captain, Fred Elliott, was suspended on the eve of the 1907 finals he agreed to step into the breach, to telling effect: Carlton won back to back flags with a hard fought five-point Grand Final win over South Melbourne, and stand-in skipper Flynn vied for best afield honours with George Bruce.

In 1908, Jim Flynn again played only in the finals, this time under Fred Elliott's captaincy, and was again an important contributor as the Blues made it three premierships in a row with a nine-point grand final defeat of Essendon.

After missing the entire 1909 season, the last of Jim Flynn's 77 appearances in a Carlton jumper came in the team's 1910 semi final loss against South Melbourne.