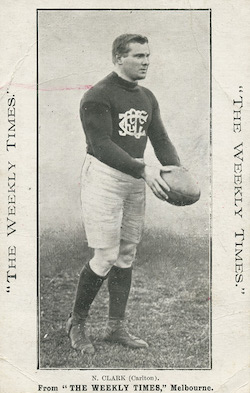 Glorifying in the distinctively unusual nickname 'Hackenschmidt' - derived from the world champion bodybuilder of the era whose physique he allegedly shared - Norm Clark enjoyed a highly successful and varied football career that perhaps deserves to be feted more widely than it is. He began with North Adelaide, where he established a reputation as a tough, no frills, ultra reliable half back. He was also extremely quick, as he proved by winning the 1899 Stawell Gift. A year later he helped North to their first ever premiership as they overcame South Adelaide in the SAFA Grand Final by 13 points, 4.3 (27) to 1.8 (14). Clark was on a half back flank that day, and two years later played at centre half back as the red and whites won a second flag, once again at the expense of South Adelaide.

Midway through the 1905 season he made his second interstate appearance for South Australia¹ in an 8.14 (62) to 6.19 (55) defeat of the VFA in Melbourne, and among the impressed onlookers were officials from VFL club Carlton. Round ten of that same season saw Clark lining up for the Blues against South Melbourne in the first of an eventual 126 appearances for the club at which he was to achieve his greatest success. Among those appearances were the winning Grand Finals of 1906 against Fitzroy, 1907 against South Melbourne, and 1908 against Essendon. Playing in a back pocket, Clark was listed high in the best players in 1906, performed serviceably the following year, while against the Same Old he was a popular choice as best afield.

In 1909 Clark was the centre of controversy when Carlton dropped him for 2 games after he sought additional match expenses both for himself and his team mates. He was later strongly instrumental in bringing influential secretary-coach Jack Worrall's tenure at the club to an end.

In 1912, Clark embarked on a new phase of his career when he took on the role of playing coach, but despite steering his charges to a creditable third place his services were not retained. Clark also chose this moment to retire as a player. Two years later, however, after spending the 1913 season as coach of VFA side Brighton, he was back at Carlton, this time as non-playing coach, and he was immediately successful in steering the club to its sixth senior grade flag (and its fourth in the VFL). In 1915, he repeated the achievement, meaning that he was the only person to have had direct involvement in the Blues' first five league premierships. Clark remained at the helm until 1919 when he spent a one year coaching sojourn at Richmond, masterminding that club's first ever bona fide VFL finals campaign (discounting the 1916 season when, as one of only four club's in the competition, Richmond's finals participation had been automatic).

In 1920 Clark once again assumed the reins at Carlton, but two years later he was controversially replaced by Horrie Clover, with the committee expressing the view in the club's 1922 annual report that Clark's methods were not in the team's best interests.² Although the Blues ultimately made the finals in 1922 it would be the last time for five years. During Clark's seven full seasons at the helm the club had never once failed to contest the final round, had won two flags, and had managed a magnificent overall success rate of 70.7%.

Norm Clark later undertook coaching stints at St Kilda (1925-6), Prahran (1930), and North Melbourne (1931) without ever threatening to emulate his earlier achievements. Nevertheless, those achievements, notably his involvement in no fewer than seven senior grade premierships in two states, clearly mark him as one of the prime shaping forces of the game in the early twentieth century.