Almost a century before former Melbourne and West Coast player Darren Bennett's much vaunted exploits as a punter in the NFL, Patrick John O'Dea became the first, and arguably most noteworthy, Australian footballer to transfer his talents to the American game. Indeed, so remarkable were his achievements that in 1962, very shortly before his death, he was inducted into the official American College Football Hall of Fame, the only Australian to date to be so honoured. 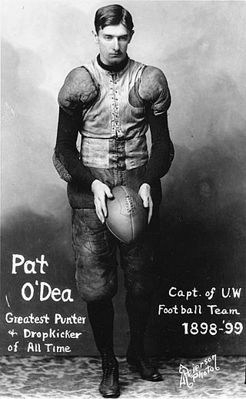 The man who would end up being popularly dubbed 'the kicking kangaroo' first gave notice of his exceptional athletic ability when, in 1892, aged just 16, he made his senior debut for Melbourne in the VFA. At a time when the very continued existence of the oldest club in football was under serious threat, O'Dea proved to be a rare shining light. Midway through his debut season he was selected to represent Victoria in an intercolonial match against South Australia in Melbourne, and helped the home side to a two-goal win (10.9 to 8.6, behinds not counting). He later played twice more for the colony, whilst simultaneously helping Melbourne develop into one of the strongest teams in the Association.

A highly efficient if unspectacular all-round footballer, it was his prodigious kicking that really captured attention, and, at the time, perhaps only Essendon's Albert 'The Great' Thurgood enjoyed a higher reputation in that particular art.

In 1896, however, Pat O'Dea left the world of suburban Australian football competition far behind him when he travelled to the USA to embark on a course of study at the University of Wisconsin. While there, he was tempted to try his hand at the local version of football, and the results were so spectacular that he ended up re-writing some of the sport's records. On one occasion, for example, he was reputed to have punt-kicked the American ball an all time record distance of 110 yards. More verifiably, on 15 November 1898 he drop-kicked a goal from a distance measured at either 83 or 62 yards, depending on which source you refer to. He was also credited with a run of 90 yards against Beloit in 1899.

During the 1890s, and indeed for some time afterwards, inter-collegiate football was the pre-eminent version of the code, and Pat O'Dea remained heavily involved as both a player - earning All American selection in 1899 - and coach (initially of highly renowned football college Notre Dame, and later of Missouri) until 1902.

In 1917, however, 'the kicking kangaroo', who was still a subject of persistent scrutiny and adulation, decided that he had had enough of the celebrity lifestyle, and for the remaining 45 years of his life remained determinedly out of the limelight. His remarkable achievements, however, ensure that his name will continue to be remembered, and extolled, for many years to come - although, in keeping with the lamentable ignorance which Americans all too often display toward anything occurring outside their immediate ken, official gridiron records persist in referring to O'Dea as a former Australian rugby player.