Media Release: Eight new members have been inducted into the AFL Hall of Fame. 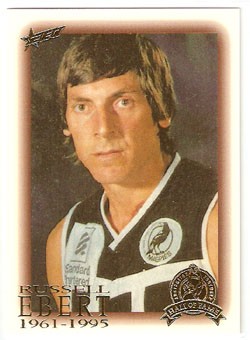 Port Adelaide centreman Russell Ebert, named by the club as the greatest player in its history, was tonight elevated to Legend status in the Australian Football Hall of Fame. At tonight’s 2022 induction ceremony for the Hall of Fame in Melbourne, Ebert was named as the 32nd Legend in the history of the game, having played a club-record 392 games with the Magpies, as a three-time premiership player, four-time Magarey Medallist and six-time best and fairest. Dian Ebert accepted the honour on behalf of her late husband, who passed away in late 2021.

Eight new members were welcomed into the Australian Football Hall of Fame, with their careers covering both the current national competition at AFL level and the histories of the state leagues in WA, SA and Tasmania. The eight new inductees are Terry Cashion, Bill Dempsey, Mike Fitzpatrick, Brent Harvey, Matthew Pavlich, Michael Taylor, Ted Tyson and Nicky Winmar.

AFL games record-holder Brent Harvey has been recognised for his achievements as a Premiership Player and five-time Club Best and Fairest. Harvey was an E.J Whitten Medal recipient, a Jim Stynes medal recipient and also a four-time All Australian player.

Matthew Pavlich is the former Fremantle games record-holder with an impressive 700 goal tally and a six-time Club Best and Fairest. Pavlich was also a six-time All Australian.

Michael Taylor was celebrated with 289 games for Norwood (SA) as well as a six time Best and Fairest winner and nine-time SA team of the year recipient. Taylor has also been recognised as a Norwood Football Club Hall of Fame Legend.

The late Ted Tyson was celebrated with 228 games for West Perth and being named a two-time WAFL leading goalkicker and six-time Century goalkicker. Tyson was also named as a player in the West Perth Team of the Century.

Bill Dempsey who was also honoured as the 2022 Sir Doug Nicholls Round Honouree, was recognised for his achievements as a West Perth Team of the Century player and Indigenous Team of the Century player. Dempsey was a three-time NT Premership player and three-time WA Premership player as well as playing 343 games for West Perth which is the second most WAFL games ever played.

"I'm pleased to be able to celebrate tonight and also acknowledge the 2020 and 2021 inductees who tonight are able to join us in recognising their achievements," said Mr Goyder.

The committee considers candidates on the basis of record, ability, integrity, sportsmanship and character. The number of games played, coached or umpired or years of service is a consideration only and does not determine eligibility.