A chance find in a South Perth garden has set the scene for a little footy history mystery. Andrew Gigacz tells the story of Bert Hall's 1901 medallion.

A small entry in the The Laverton Mercury, a newspaper from the Goldfields-Esperance region of Western Australia, dated Saturday 14 December 1901 includes the following line:

The players in question were footballers, whose efforts for the Imperial Football Club in the 1901 season earned them those medals. The presentations were made at Tattersall's as part of a meeting at which other gold medals were presented to best players of three clubs – Federal and Rovers on top of Imperial – along withe best player of the three-team league, Hanks, the best "place man", Vincent, and the leading goalkicker, P O'Neal.

There's nothing inherently unusual about this story. It's the type that would have been repeated all over Australia at the time. In fact, it still happens all over Australia, although most footy clubs award trophies these days rather than gold medals.

Some players keep their trophies as mementos, reliving special memories on the odd occasion they might bring the trophy down from the shelf in the study or the back of a wardrobe. Others aren't so sentimental. Their trophies end up at the local op shop or the tip.

But what about those medals from 120 years ago? Did Messrs Hall, Marvin and McLean keep them and pass them down through family generations? Or did they too end up at the tip, or perhaps melted down for their intrinsic value? 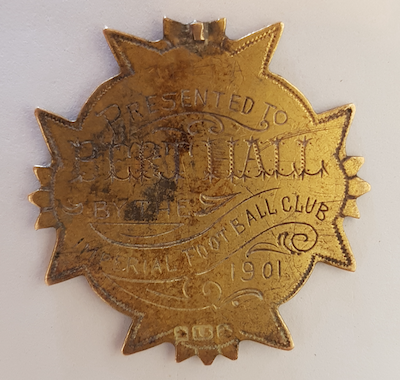 Well, thanks to a recent find in Perth, we know that at least one of those medals appears to have survived.

A few weeks ago australianfootball.com received an email enquiring about  find made in the back garden of a house in South Perth. Here's what the email said:

"I found a small medallion in my garden in South Perth with the name Bert Hall, Imperial Football Club, 1901 inscribed in it. I googled Bert Hall and your website came up. The timeline matches up although maybe just coincidence. It's probably not worth very much but might have some sentimental value to the family? Do you have any more information on the player? I haven't been able to find anything else. Thanks, Will."

Will's garden find appears to match up perfectly with the entry in the Laverton Mercury. Although it's true that Hall is a common surname and Bert was a very common first name at the turn of last century, and it's also true that there were a number of footy clubs that went by the name 'Imperial', the date makes it pretty likely that the medallion from South Perth is indeed the one referenced in the Mercury.

The Bert Hall that led Will to our website appears to be a different one. The one on our list played a single game for Geelong in 1902, placing him in the right era, but he appears to have been recruited locally and then returned to his local side, Barwon. Imperial's Bert Hall appears to have remained in the Goldfields-Esperance region over the following decade, based on other newspaper entries.

How Bert's medallion found it's way to Will's garden is a mystery. Will tells the story of how he came across it, back in 2016: "I was gardening in my backyard and a few small trees were a little out of place, so I removed them. I dug out one of the stumps and completely underestimated the task, it took me half the day! I was moving it to the bin, rolling it because it was a bit heavy, and when it went over some pavers the medal fell out. It must have been buried there for years."

Will was unable to make out a name under all the dirt so he put it aside and thought nothing more of it until recently when he came across it in preparation for a house move. He cleaned it up and contacted us.

A find like this is unusual but not unique. In 2012 a family in the Melbourne suburb of Seaford was digging up their backyard for a renovation when they unearthed a trophy awarded to Harry Hickey in 1939 as Footscray Football Club's best and fairest player! In a stroke of luck the family just happened to be mad Bulldogs fans and they were more than happy to donate it to the club.

How do such 'treasures' end up in backyards and gardens? Burying valuables in gardens was actually not an uncommon practice in times past. Many in war-ravaged Europe used it as a way of trying to sure they were not lost to looters if the war came to their neighbourhood. That never happened in Australia, of course (with the bombing of Darwin an exception), but it was still a common practice. 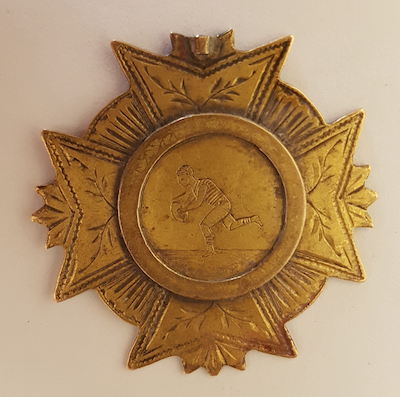 In fact it may still be one. In a podcast about a missing Australian woman called The Lady Vanishes, reference is made to the backyard burial of documents and jewels within the last 20 years.

But back to Bert Hall's medal. Will would very much love to see the medallion reunited with Hall's family. Tracking them down might be somewhat of a long shot, given the number of Bert Halls that would have lived in Western Australia, even 120 years ago when the state's population was under 200,000.

The photos shown here reveal hallmarks on the medal, which might yield a clue to the medallion's manufacturer, but finding Bert's descendants might be a tougher task.

Nevertheless, we'll give it a go! As Will says, "It would be great to find it’s rightful home. Even if we can’t find the family I would like to hand it over to a local footy club and add it to their memorabilia. The last thing I want to do is take some local history away from where it belongs!"

If you can help in any way please email me at andrew@australianfootball.com and we'll see if we can reunite Bert's backyard medal with the Hall family.

In this article:
Bert Hall