In response to a question from a fan, Andrew Gigacz looks at past V/AFL teams that have flown out of the blocks before falling short of finals.

Port Adelaide this year began their AFL season 0-5, prompting some to ask if a V/AFL team had ever come back from such depths to make the finals. The answer is yes, and it was not so long ago. The Sydney Swans, having been grand finalists in 2016, started off the 2017 season with six losses, but somehow managed to claw back into finals calculations, eventually finished with a 14-8 record.

This week, though, I received a question about the opposite occurrence. A friend of mine, Scot Muirden, asked how many times a team has started a season 5-0 and then missed the finals. Scot, a passionate St Kilda man, new it had happened at least once, to his beloved Saints back in 1950. Scot also had a supplementary question: has a team ever started a season 8-3 or better and then missed the finals?

First things first, we'll answer Scot's initial question. Along with the Saints in 1950, 12 other teams have kicked off a season with five wins or more and then fallen by the wayside prior to the finals. The most recent of those was a highly unusual case, though. In 2013 Essendon started off 5-0 and were flying. The Dons ultimately finished with a 14-8 record, which would have been more than enough for them to finish seventh that year. But a small matter that became known as "the supplements saga" resulted in Essendon being disqualified from finals participation. 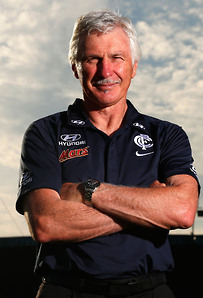 For the most recent 'untainted' example of a team starting a season with five wins and missing finals we need to go back all the way to 2000. In Mick Malthouse's (left) first season as coach, the Pies flew out of the blocks and were equal top of the table after Round 5, undefeated. From their things went completely pear-shaped and Collingwood won just two more games, eventually finishing second-last on the ladder with a 7-15 record.

Oddly enough, Geelong repeated the 'feat' just a year earlier. A 50-point thrashing of Carlton in Round 5, 1999 took the Cats to 5-0 and second place on the ladder. What followed was a fall from grace of massive proportions. Geelong lost its next nine games in a row to slump to third-last on the table. A three-point win over bottom side Collingwood reignited the Cats, and they went on to win five of their last eight matches, but their ultimate 10-12 record was not enough to take them into the finals.

Eleven other sides have started a season 5-0 and missed finals, but all of those came prior to 1972, when only the top four (of 12) teams qualified as finalists. Melbourne were 5-0 in 1971 and missed out, and six years earlier the Demons were 8-0 and flying when coach Norm Smith was infamously sacked. Smith was reinstated soon after but his side fell off the cliff, missing the finals that year and in the 21 seasons after that. 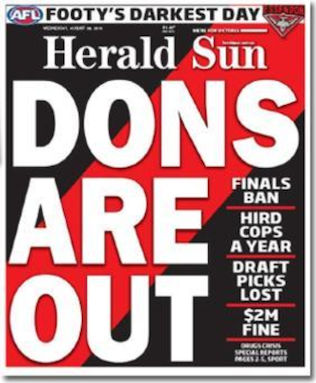 Looking at Scot's second question, more than twice as many teams have started a season 8-3 and missed finals as there have been begin 5-0 and miss. The most recent case came in 2015, and it completed a run of four consecutive years in which an 8-3 side ultimately did not qualify. Again, though, one of those was Essendon in 2013, courtesy of the supplements scandal.

Before that, we have to go back to 1981 for the next example. Hawthorn were 8-3 that year but ended the year 13-9. Such a record has seen many sides qualify for finals but it was not enough for the 1981 Hawks.

The remaining 22 cases all occurred prior to the introduction of the final five system in 1972. Many of the pre-1972 cases would have qualified for finals under a top five system.

One unique pre-1972 case occurred in 1945. In that year two sides started their seasons 8-3 and eventually missed out on the finals. Footscray were 8-3 after 11 games and on target for finals but ultimately finished with 12 wins and eight losses. Richmond began its season the same way before slipping to seventh with an 11-9 record.

1963 and 1964 are quirky cases for different reasons. In 1963, both of the two grand finalists from the previous season featured on the lists, one in each. Carlton were 5-0 and on top of the ladder after five rounds, and three weeks later Essendon headed the ladder with a 9-2 record. Ultimately, though, they both missed the top four.

A year later Hawthorn were 8-3 but just missed out on the top four despite an excellent 13-5 record. In the second-last home-and-away round of that season, the Hawks lost to Melbourne, who finished on top of the ladder with a 14-5 record by just four points. Had Hawthorn kicked an extra goal in that match, they would have finished on top and Melbourne, who went on to win the premiership, would have missed the four.

This year Melbourne started the year off 5-0 and were 10-1 after 11 rounds. The Demons have lost two matches in a row now, though. Could they be doomed to join the '5-0 and miss the finals' club?' After Round 11 this year, there were four other clubs that had records of 8-3 or better. The Brisbane Lions were 9-2, while Fremantle, St Kilda and Carlton all had 8-3 records.

It seems unlikely that any of them will miss the finals this year, but the same thing was probably said of all the sides who were 8-3 in previous years! 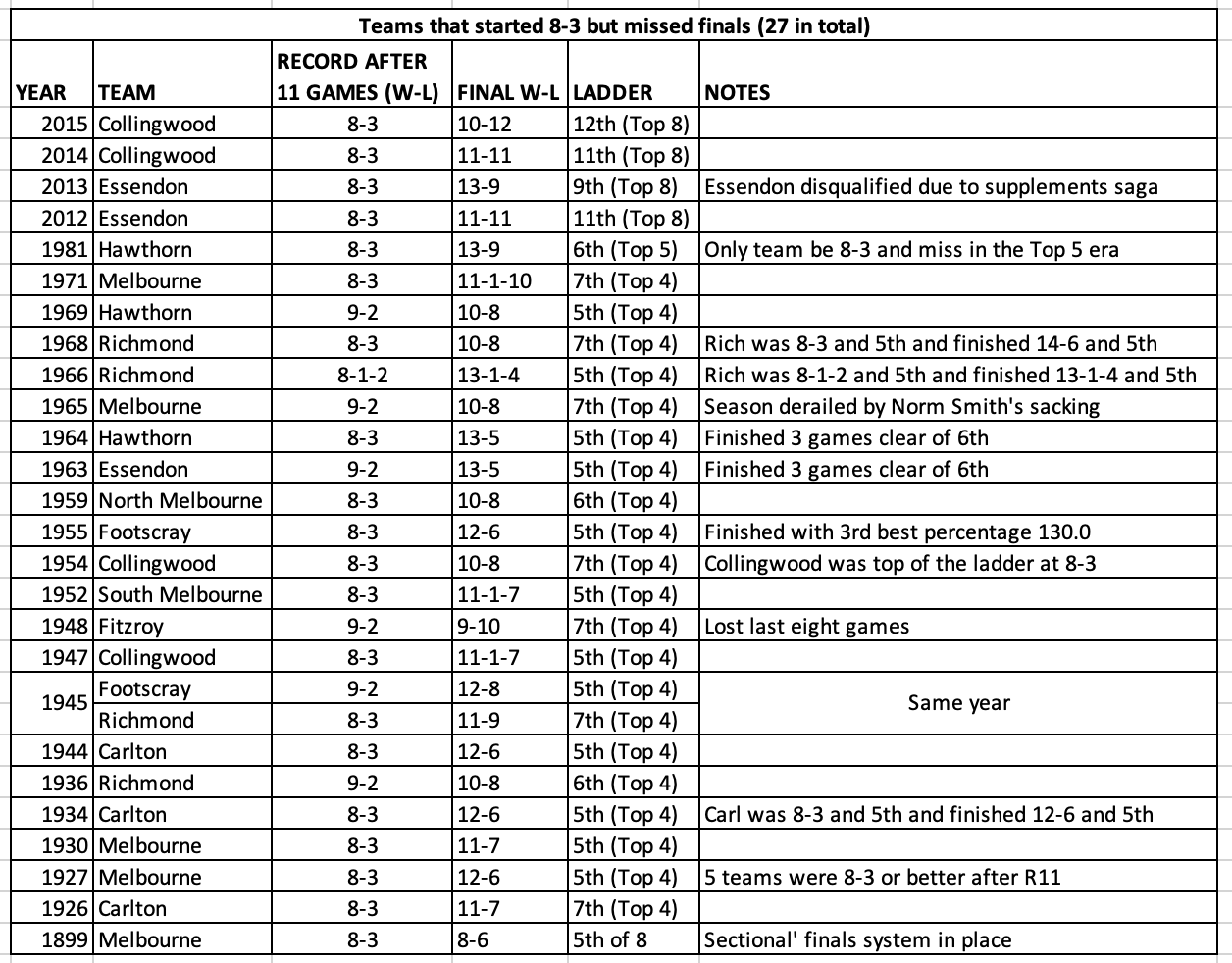