The Argus's Percy Taylor covers the drama of the 1946 interstate match between Victoria and South Australia. The match ended in a thrilling draw. 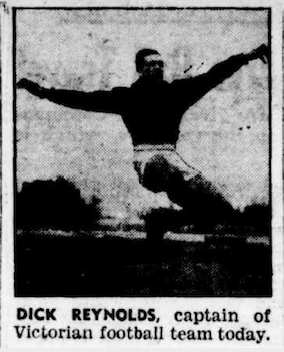 Victoria, with pace, dash, and a home ground advantage, should de-feat South Australia at Carlton today, but it will not be easy. When the teams last met in Adelaide South Australia won comfortably. On that occasion they left the selection of their team until they had studied the composition of the Victorian team. They then realised that the visiting side was not predominantly youthful, and they picked men with pace and dash. The result was that they ran Victoria off their legs.

For this match, however, the position has been altered. Although there is considerable experience in the Victorian team, there is also youth, dash, pace, and system. This, with the robust game that Victoria plays so well, should give them the points. Victory will not be easy, because the South Australians have come here full of confidence. They know what to expect when they come to Melbourne, and believe they have the skill, the weight, and the dash to repeat their grand performance of last year.

The match will start at 2.30pm, and Sawyer has been appointed umpire.

One of the most remarkable finishes in football history was seen on Saturday when South Australia.and Victoria each scored 123 points. When Victoria led by 39 points at half-time the game seemed over, but South Australia played a most remarkable second half. They produced match-winning pace, dash, and skill, and kicked 12-5 to 2-2 to lead by four goals, with only a few minutes to play. 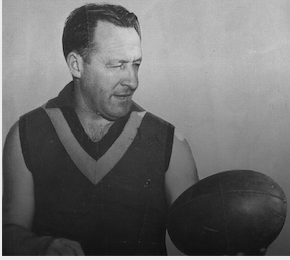 Just when a South Australian victory seemed certain Victoria collected their scattered morale, and kicked four consecutive goals in almost as many minutes to level the scores and leave 30,000 spectators almost hysterical with excitement. The impossible was followed by the impossible in a game that has put interstate football definitely on the map.

Steady rain during the morning left the Carlton ground somewhat soft and greasy. South Australia floundered considerably in the first half, in which the adaptable Victorians had much the better of the game. Victoria won in the ruck and in the air, but the defence was not as tight as it should have been. Long hand passes gave South some openings, but hurried kicking spoilt chances.

The high marking of Fanning was the most disconcerting feature to the visitors, who changed their full back in the second quarter. From that point there were usually two men fighting with Fanning for the ball and Victoria did not try to attack through the man who was left alone while Fanning was tackled.

The ground was drier in the second half, and the ball much easier to handle. Only a fighting finish could save the game, and South Australia immediately set out with great pace, dash, and determination to make up the leeway. Four quick shots gave them three goals, the fourth hitting the post—they did that three times during the match—and they scored 5-3 to 2-1 for the quarter. Splendid handball, with men rushing into position for the passes, was chiefly responsible. Victoria, scenting danger, endeavoured to regain control, but were met with dashing defence, and the fire and dash in the play caused the crowd to begin to cheer.

At the last change Victoria's lead had been reduced to 19 points, and they were a worried band as South Australia continued to play with remarkable pace and dash. South tore through the packs with such pace that they could not be stopped, they bounced off opponents and went on as if nothing had happened, they flew in the air and stopped Victoria's high marks, and did not flinch from the heavy exchanges. They quickly had 2-1 up. Victoria came back for a behind, but South swarmed to the attack again, and the crowd could not believe it when six quick attacks brought five goals and a behind—and a four goals lead.

Just when the game looked lost Fanning (right) scored for Victoria, Hutchison followed with two—one a foot away off the ground through an opponent's legs—and then Fanning marked high about 30 yards out. His punt curled through to level the scores. South stormed ahead, where Hoskins turned them back, and Victoria were attacking again when the bell rang.

Victorians, apt to regard state games as necessary evils, will have to change their attitude. The time is coming—If it is not already here when our superiority is being challenged, and stern efforts will have ii to be made to keep on top. When Victoria played in Adelaide last year they were easily defeated, but the excuse then was that we had sacrificed youth and pace to experience. For the match played on Saturday a fairly good team was chosen when the limitations placed on the selectors is considered. Yet, on our own ground, and with everything to our advantage, we were most fortunate to escape defeat. 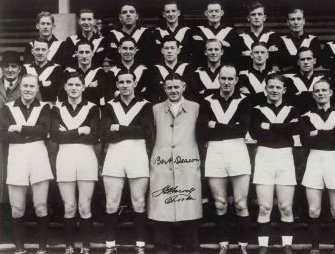 Unless the lesson we were taught on Saturday is heeded Victoria will be trounced in Adelaide next month. More pace is needed lo combat the opposition. Victorian teams usually swing into a system very quickly, but on Saturday they lacked combination. Too often they spoilt each other, or one man left it to the other. The result was the same, the fleet-footed South Australians dashed in and whipped the bail away. Admittedly the ground did not favour our long kicking, high marking game, yet it did not stop most players using the drop kick, which meant inaccurate kicking. To this long-kicking game, however, must be added pace.

Selectors will probably make a few changes—but not many—for the next game, and they intend to get the players together for practice before they leave for Adelaide. Defeat in Adelaide may result in a change in the system of selection, so that the best players can be chosen irrespective of clubs. This may mean suspension of club games while the Victorians are out of the state, but clubs could play country games to advantage.