In 1977, Jim Main was asked to name his 100 greatest players. Nearly four decades later, Australian Football has invited him to revisit and revise that list. 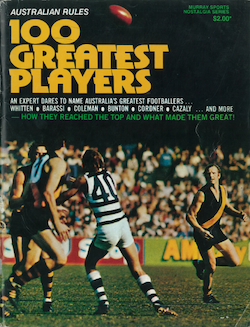 Hindsight might be wonderful, but it also can be embarrassing – especially if it is in black and white for all to see.

More than 30 years ago, I was approached by the K.G. Murray Publishing Company to compile and write a magazine-type book on Australian football’s 100 greatest players.

Fortunately for me (in hindsight, of course), I did not have to list the 100 in order of merit but, rather, in chronological order. This meant that the first of my 100 was St Kilda champion Dave McNamara (right), followed by Collingwood goalkicking legend Dick Lee, and so on. The book ended with the greatest players of the then contemporary era – North Melbourne’s Keith Greig and Barry Cable, Hawthorn’s Leigh Matthews and other champions of the 1970s.

All these players would still make my list of the 100 greatest footballers to have played in the VFL/AFL, but many of those I originally listed no longer would make the cut. After all, there have been many champions since this book was published not long after Gough Whitlam was elected Prime Minister in 1975 and Cyclone Tracy devastated Darwin the previous year.

I am not in the slightest embarrassed about my 100 original selections as I gave the project considerable thought and, in fact, agonised over those who would and should not be included. But, with all due respect to many of the original 100, they would not make my cut with a selection of the best 100 to the present day.

This is highlighted by the fact that the player I regard as the best of today’s crop, Gold Coast’s Gary Ablett, was not even a twinkle in father Gary Senior’s eye when I made my original selections. He was not born until May 14, 1984, well after copies of my old book ended up at the back of cupboards.

And, if I was asked today to nominate my best all-time players in order or merit, both Gary Abletts would be in the top half dozen. They would be entitled to be miffed as their records speak for themselves, with Ryan and Box winning Brownlow Medals.

Mohr was a wonderful goalkicker, Foote was especially gifted and the others had rare brilliance, toughness or leadership qualities, with some having all these qualities.

However, the past 30 years of so have thrown up any number of truly outstanding champions, many of whom already have been admitted to the Australian Football Hall of Fame. My newcomers, in no particular order (least of all one based on merit) would be the two Gary Abletts, James Hird, Craig Bradley, Dermott Brereton, Wayne Carey, Tony Lockett, Adam Goodes, Robert Harvey, Simon Madden, Stephen Kernahan, Malcolm Blight, Bernie Quinlan, Michael Tuck, Nathan Buckley, Matthew Lloyd, Chris Judd, Michael Voss, Greg Williams and Jason Dunstall. Wow, that’s more than a few changes to the list.

Let’s look at their individual records:

GARY ABLETT SENIOR
Many rate Ablett the greatest player of all time, but I believe this is one accolade too many as I rate Ted Whitten, Wayne Carey, Bob Skilton and Leigh Matthews ahead of the man Cat fans adored as “Superman”. However, Ablett was a freakish player, brilliant in all aspects of the game. And to think that Hawthorn let him go.

GARY ABLETT JUNIOR
Ablett the Younger is as good as his old man, and he has a Brownlow Medal to show for his brilliance, with perhaps another one or two to come. His current form for Gold Coast has his many fans salivating and few would argue that he is the best player in the current era. 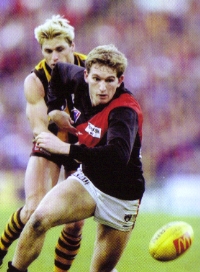 JAMES HIRD
There have been few more graceful footballers than Hird (right), who seemed to drift from one position to another to take control of a match. He had the lightest of touches in the air and was superbly evasive. A Brownlow Medal and a premiership as Essendon captain are just the tips of his performance iceberg.

CRAIG BRADLEY
Bradley might have had his critics, most of who suggested he was a “wide boy” who avoided the crushes, but this is grossly unfair. Bradley was a ball magnet in 375 games with Carlton, and it sometimes is forgotten he played a total of 501 games with the Blues, the Port Adelaide Magpies, South Australia and for Australia in matches against Ireland. A phenomenal record!

DERMOTT BRERETON
There is little doubt Brereton rates among the greatest centre half-forwards of any era as he combined brilliance with aggression and raw courage. The Hawthorn champion had the ability to turn matches off his own boot and played in five Hawk premiership sides. Just one best and fairest award (in 1985) hardly seems adequate considering his worth to the Hawks.

WAYNE CAREY
Many would suggest that Wayne Carey IS the greatest. Although I rate him up there in the top half a dozen, I have Ted Whitten, Bob Skilton and Leigh Matthews ahead of him. Nevertheless, Carey’s brilliance at centre half-forward was a once in a generation gift from the gods. Without him, North Melbourne probably would not have won the 1996 and 1999 premierships.

TONY LOCKETT
The fact that Lockett kicked more goals (1360 with St Kilda and the Sydney Swans) puts him in a class of his own. Magnificent but moody, he was the epitome of the power forward. A superb mark, he also was quick and clever on the ground and a deadly accurate shot for goal. It is likely his goals record will stand forever. 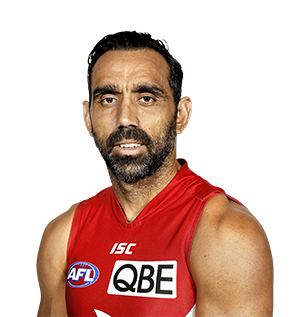 ADAM GOODES
From being a skinny kid who could not break into the Sydney Swans’ line-up in his first season with the club, Goodes (left) developed into the archetypal modern footballer – tall, quick, mobile and good in the air. Two Brownlow Medals, two premierships and a rating as the best indigenous player in football history makes him a no-brainer for any all-time list of greats in any number of categories.

ROBERT HARVEY
Harvey might have won two Brownlow Medals but his worth to St Kilda could not be measured in silverware. He won countless possessions over his 383-game career and rates as one of the greatest footballers never to have played in a premiership side. He won St Kilda’s best and fairest four times and won All-Australian honours an incredible eight times.

SIMON MADDEN
Has there been a better ruckman/forward? Madden not only won four Essendon best and fairest awards but topped the Bombers’ goalkicking in 1980, 1982 and 1991. He also was runner-up in the 1988 Brownlow Medal count and was third in 1988. Madden also won the Norm Smith Medal in 1885, played in two premiership sides and captained Victoria. What a record!

STEPHEN KERNAHAN
South Australian Kernahan ranks with the very best centre half-forwards and was an inspirational Carlton skipper. He topped the blues’ goalkicking over an incredible 11 consecutive seasons and won the club best and fairest in 1987, 1989 and 1992, not to mention leading the Blues to the 1987 and 1995 premierships.

BERNIE QUINLAN
Quinlan was not known as “Superboot” for nothing and it now is incredible to think that Footscray allowed him to cross to Fitzroy, with whom he won a Brownlow Medal in 1981. Quinlan could goal from almost any position from 65 metres. His accuracy was phenomenal and a record of 817 goals from 366 games speaks for itself. 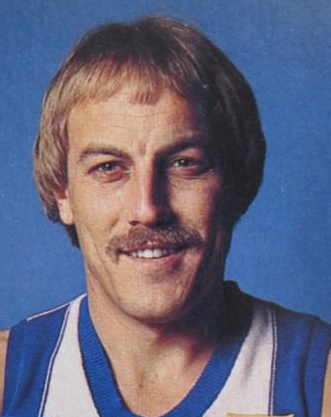 MALCOLM BLIGHT
Blight (right) not only won a Magarey Medal with Woodville, but also a Brownlow Medal with North Melbourne. One of the game’s greatest all-rounders, Blight could turn a match in minutes and even topped the VFL goalkicking with 103 in 1982. He also played in the Roos’ 1975 and 1977 premiership sides.

MICHAEL TUCK
Has there ever been a more durable footballer? Tuck played a League-record 426 games for Hawthorn, yet was unhappy when told to retire at the end of the 1991 season. Although he never won a Hawk best and fairest, he was runner-up six times and captained Hawthorn from 1986-91. Coach David Parkin once described him as the best run-on player he had seen.

NATHAN BUCKLEY
Few footballers have looked smoother than Nathan Buckley, who rose to super-stardom with Collingwood after starting with the Brisbane Bears. A Brownlow Medal, a club record six best and fairest awards, a Norm Smith Medal but, alas, no premiership medallion. Perhaps he can win one as Collingwood coach.

MATTHEW LLOYD
Lloyd sits seventh on the all-time VFL/AFL goalkicking list with 926 goals from 270 games with Essendon. Although he had his critics, Lloyd was a goalkicking machine who topped the Bombers’ goalkicking an incredible 12 times. A strong mark, a fast lead, clever on the ground and, most important of all, a deadly left-foot shot for goal.

CHRIS JUDD
Judd has been a ball magnet with Carlton and, earlier, with West Coast. Two Brownlow Medals, captain of the 2006 Eagle premiership side, a Norm Smith Medal and countless other awards are testament to his all-round brilliance. Just the type of player to inspire teammates.

MICHAEL VOSS
Voss was inspirational in most of his 289 games with the Brisbane Bears/Lions. He won a club record five best and fairest awards, won a Brownlow Medal and, most important of all, was captain of the Lions’ 2001-03 premiership side. There have been few better leaders in any football era. 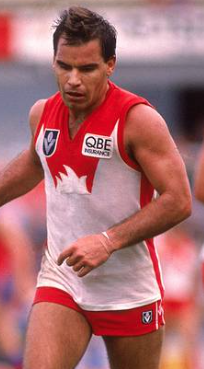 GREG WILLIAMS
It is incredible to think that Williams (left) played just one season with Geelong before becoming a super-star with both the Sydney Swans and Carlton. There have been few better ball-winners and his handpassing was peerless. And, to cap the dual Brownlow Medallist’s career, he played in Carlton’s 1995 premiership side.

JASON DUNSTALL
Dunstall topped Hawthorn’s goalkicking 12 times, with a season’s best of 145 in 1992. His total of 1254 goals from 269 games puts him behind only Tony Lockett (1360) and Gordon Coventry (1299) in the League’s pantheon of goalkicking greats. Oh, and he also kicked 17 goals (plus five behinds) in a match against Richmond in 1992.
So there it is, and I apologise for overlooking any of your favourites.

The old and the new

I would have to agree with 'The Pope'. Jim Main's put together a fine list, but it is in essence a list of the greatest V/AFL players since 1901.

The greats of the 19th Century are omitted, i.e., Coulthard, Thurgood, Burns, Worrall, McGinnis, et al, as are the greats of the SANFL and WAFL, men such as Matson, Leahy, Daly, Doig, Naylor, Farmer, Quinn, Moriarty, Hamilton, Walker, Michael, Robran, Ebert, Truscott, Marsh, and Hank, to name the most prominent.

In due course australianfootball.com will put together its own list of greatest players, ranked in order (based on our subjective opinion of course) that will hopefully restore balance to the debate.

Great article Jim. Your book takes me back, I obtained a copy in 1980-81 from a footy show bag at the Royal Melbourne Show and as an 8 year old was mesmerized by some of these names. For a child, it was a great introduction to the history of VFL/AFL footy. It's interesting to see your updated list, which inevitably will be the subject of debate. But you got me thinking - I started to jot down a list in terms of positions and in the end came up with bascially a VFL/AFL Team of the Quarter Century i.e. 1987-2012: