A team of the world's most frightening dictators and leaders. Based from an idea suggested by Kevin Sheedy at a dinner he addressed in Adelaide in 2009.
read more 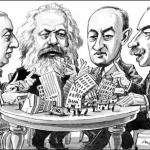 As a teen was a trainer during North's golden age winning 71-72 grand finals and narrowly missed 1973 grand final against Glenelg Trialled as a North under 17 but never received a transfer from South Adelaide , so played with St Peters YCW and later Modbury Hawks After being a trainer at North until 1976 became a teacher and coached junior football sides at St Pauls College and St Peters College from 1979 to 2011 , where I coached teams at all levels except year 8 and Ist XVIII, but mainly year 9. Some of the exceptional young men i have been fortunate enough to coach include Stuart O"Grady ( Olympic cyclist) Paul Rogers ( Australian basketball) Sean Wellman (Essendon) Tom Harley ( Geelong) Phil Davis ( Adelaide, Greater Western Sydney )

1973 grand final - north had hit front with just minutes to go. As a fifteen year old kid i ran out drinks and over excited about winning. Barrie Robran told me to ^**& off the game hadn't been won. Five minutes later North had lost , grown men wept in despair . In the gloom , standing quietly in the corner , Barrie Robran came over and apologised for swearing at me -inspirational and a gentlemen - to think of a kid at such a time and maintain what he knows was right